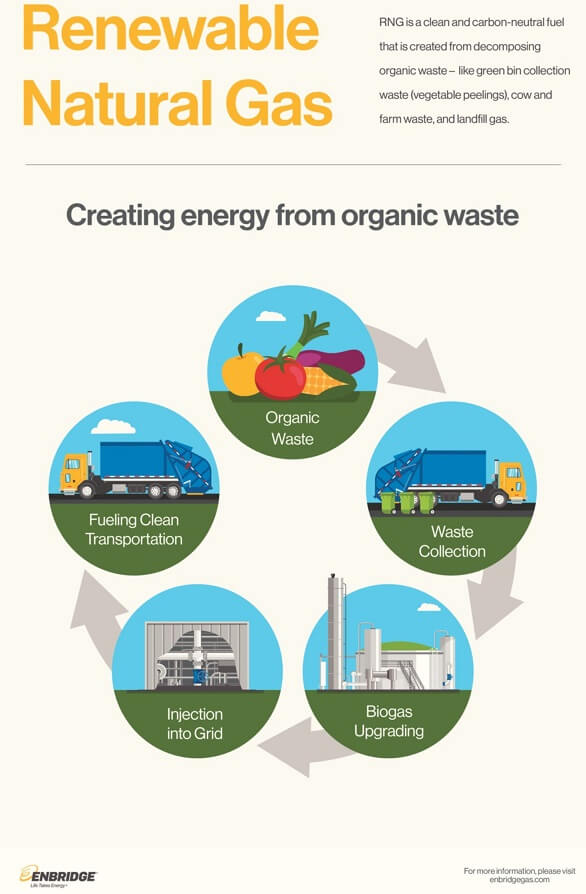 In partnership with Enbridge Gas Distribution Inc., the City of Toronto, Ontario, is making moves to operate a facility that will turn biogas into renewable natural gas (RNG) to fuel the city’s garbage trucks.

Later this year, the partners will begin installing equipment at the Dufferin Solid Waste Management Facility, allowing them to transform raw biogas produced from processing Toronto’s Green Bin organics into RNG, which will then be injected into the natural gas grid. Once in the grid, the city will be able to use the RNG to fuel waste collection trucks.

The first cubic meter of RNG is expected to be produced at the facility – which will be Toronto’s first of its kind – by the third quarter of 2019.

“This project represents a path to low-carbon fuel for the city and will play an important role in helping us reach our goal of reducing greenhouse-gas emissions by 80 percent by 2050,” says Toronto’s mayor, John Tory. “I’m committed to working with city council and city staff to ensure we are meeting our climate change action goals and to creating a more sustainable Toronto.”

“The Dufferin Organics Processing Facility is one of two state-of-the-art city facilities that use innovative pre-processing and anaerobic digestion technology to break down organic material,” adds Councillor Jaye Robinson, chair of the city’s Public Works and Infrastructure Committee. “Introducing RNG production at the site further emphasizes its status as a leading sustainable solid waste management facility.”

The city is partnering with Enbridge on the design and construction of the new equipment, as well as its operation and maintenance for the first 15 years.

“There is little debate that we need to look for cleaner or lower-carbon energy options to heat our homes and move our vehicles. While traditional natural gas is the cleanest-burning conventional fuel, RNG is the first step in ‘greening’ the natural gas system,” states Cynthia Hansen, executive vice president for utilities and power operations at Enbridge Inc. “The City of Toronto has recognized this, and I commend Mayor Tory for seeing this vision through, and we look forward to additional opportunities as a result of this partnership.”

According to the city, current estimates suggest that the Dufferin RNG facility will produce approximately 5.3 million cubic meters of RNG per year – enough to power 132 heavy-duty garbage trucks or about 90% of Toronto’s solid waste collection fleet. This is the first of four waste-to-RNG production opportunities identified by the city.