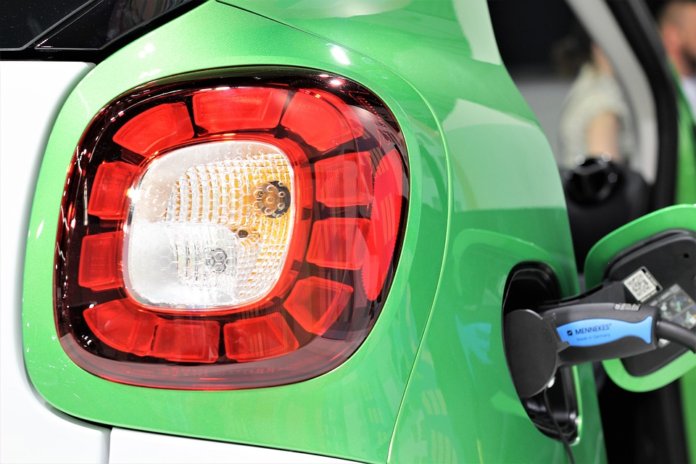 The electrification of road transport will move into top gear in the second half of the 2020s, predicts Bloomberg New Energy Finance (BNEF) in a new global report.

Thanks to tumbling battery costs and larger-scale manufacturing, sales of electric vehicles (EVs) are expected to increase from a record 1.1 million worldwide last year to 11 million in 2025 and then surge to 30 million in 2030 as they establish cost advantages over internal combustion engine (ICE) cars, according to BNEF’s 2018 Electric Vehicle Outlook.

BNEF predicts that China will lead this transition: Sales there could account for almost 50% of the global EV market in 2025 and 39% in 2030.

Globally, the number of ICE vehicles sold per year (gasoline or diesel) is expected to start declining in the mid-2020s as EVs bite hard into their market, the report says. In 2040, some 60 million EVs are projected to be sold – equivalent to 55% of the global light-duty vehicle market, according to BNEF. Shared-mobility cars will be a small but growing element, the report notes.

The advance of e-buses will be even more rapid than for electric cars, according to BNEF’s analysis. It shows electric buses in almost all charging configurations having a lower total cost of ownership than conventional municipal buses by 2019. There are already over 300,000 e-buses on the road in China, and electric models are on track to dominate the global market by the late 2020s, the report says. 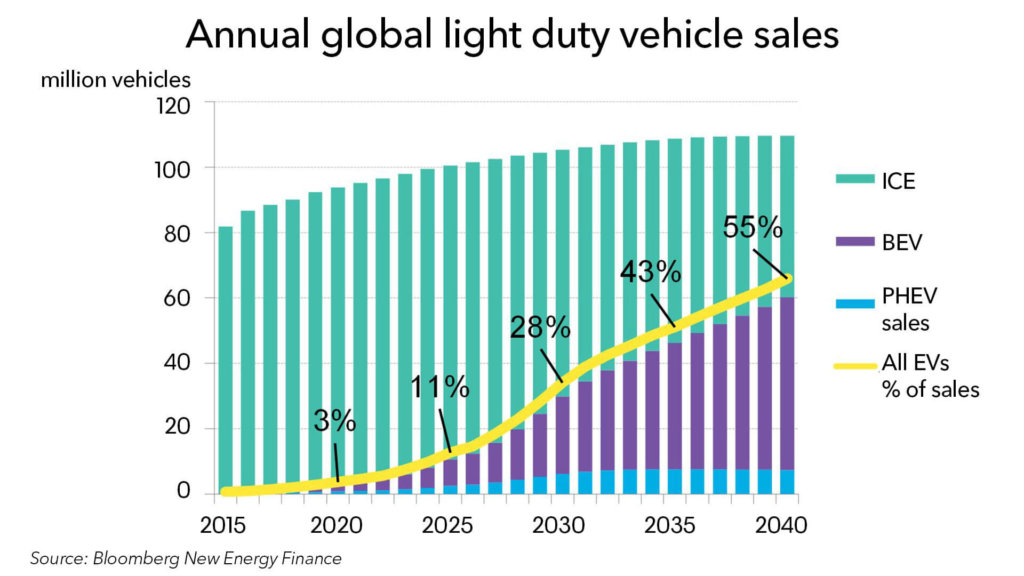 “Developments over the last 12 months, such as manufacturers’ plans for model rollouts and new regulations on urban pollution, have bolstered our bullish view of the prospects for EVs,” says Colin McKerracher, lead analyst on advanced transportation for BNEF. “The changes to our forecast this time compared to the previous one a year ago are modest, at least as far as cars are concerned. We now think EVs will be 55 percent of light-duty vehicle sales in 2040, rather than 54 percent, and represent 33 percent of the total car fleet worldwide.

“But the big new feature of this forecast is electric buses. China has led this market in spectacular style, accounting for 99 percent of the world total last year. The rest of the world will follow, and by 2040, we expect 80 percent of the global municipal bus fleet to be electric,” McKerracher adds.

BNEF expects the transition in transport to have major implications for electricity demand – and for the oil market. EVs and e-buses will use 2,000 TWh in 2040, adding 6% to global electricity demand. Meanwhile, the switch from ICE to electric vehicles is forecast to displace 7.3 million barrels a day of transport fuel, according to BNEF’s analysis.

BNEF says its team has taken a detailed look at whether the increased appetite for metals such as lithium and cobalt – resulting from the rise of electrified transport – could lead to supply shortages for these key metals.

Salim Morsy, senior transportation analyst, says, “While we’re optimistic on EV demand over the coming years, we see two important hurdles emerging. In the short term, we see a risk of cobalt shortages in the early 2020s that could slow down some of the rapid battery cost declines we have seen recently. Looking further out, charging infrastructure is still a challenge.”

The outlook for EV sales will be influenced by how quickly charging infrastructure spreads across key markets and also by the growth of shared mobility, the report predicts.

Ali Izadi-Najafabadi, lead analyst for intelligent mobility at BNEF, explains, “We predict that the global shared mobility fleet will swell from just under 5 million vehicles today to more than 20 million by 2040. By then, over 90 percent of these cars will be electric, due to lower operating costs. Highly autonomous vehicles will account for 40 percent of the shared mobility fleet.”

The pace of electrification in transport will vary by country – particularly, over the next 12 years as some markets jump ahead of others. BNEF forecasts that in 2030, EVs will make up 44% of European light-duty vehicle sales, 41% of those in China, 34% in the U.S. and 17% in Japan. However, a shortage of charging infrastructure and a lack of affordable models will hold back the market in India; EVs could make up just 7% of new car sales in 2030 there.

BNEF says its projections imply big opportunities for lithium-ion battery manufacturers. China is already dominant in this market, with a 59% global share of production capacity in 2018, and this is forecast to rise to 73% by 2021.