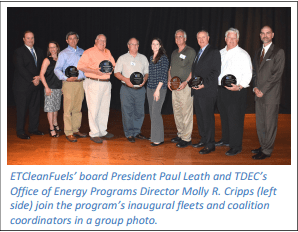 Tennessee Clean Fuels (TCF) inducted the first eight fleets into the Tennessee Green Fleets Certification Program last week at the University of Chattanooga during the second annual Sustainable Transportation Awards & Forum, which is managed by the Tennessee Departments of Environment & Conservation (TDEC) and Transportation (TDOT).

TCF says it collaborated with TDEC and TDOT on the event and assisted in setting up a 20-vehicle alternative fuel vehicle showcase that incorporated compressed natural gas (CNG), plug-in electric, propane autogas, hybrid and other advanced technology vehicles.

The Tennessee Green Fleets Certification Program is designed to utilize performance-based metrics to analyze any fleet’s vehicle and fuel-use data and compare new actions it has taken to what its footprint would have looked like without those actions.

A points-based, three-star system allows for certification at the one-, two- or three-star level, if the applicant fleet met the appropriate minimum at each level.

The program encompasses all fuel and technology options, including biodiesel, natural gas, propane, electric, ethanol, hybrid, idle-reduction and fuel economy strategies. The applicant fleets that receive certification can promote their fleet’s greening efforts and include that in its sustainability portfolio information.

The following were certified as one-star fleets:

The following were certified as two-star fleets:

The following were certified as three-star fleets:

Clean fuels on on the move in Tennessee!