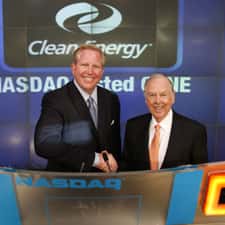 Late last week, energy industry titan T. Boone Pickens posted a compelling breadcrumb on his Twitter account, declaring that ‘problems can arise when monopoly companies veer outside their lane and expand into other industries.’

What monopoly? What industry? What is Pickens' beef?

The tweet linked to an opinion piece that he submitted to the Statesman Journal, one of the major media outlets in Oregon. That state's main natural gas utility, NW Natural, is in the midst of proceedings with the Oregon Public Utility Commission, seeking a rate rider to support a new High Pressure Gas Service (HPGS) offering.

First of all, HPGS would make NW Natural the supplier of fuel – through its gas distribution network – to potential compressed natural gas (CNG) refueling facilities.

This fact isn't the rubbing point, though. The natural gas needs to come from somewhere, and NW Natural has a monopoly (a completely legal one, mind you) on service in the majority of Oregon. Few balk at this model. NW Natural gets to operate in a territory bereft of competition, but it does so in a highly regulated manner, with highly regulated rates of return.

The rub is that HPGS would also make NW Natural the supplier of the key CNG station equipment (compressors, storage vessels and fuel dispensers) and the provider of system maintenance services through 10-year contracts.

T. Boone Pickens doesn't like this plan one bit, and it doesn't take a super-sleuth to uncover why. Pickens is the driving force behind Clean Energy Fuels Corp., the nat-gas-for-transportation giant that he and Andrew J. Littlefair founded more than 15 years ago. No company in the U.S. owns more CNG refueling infrastructure (or liquefied natural gas (LNG) refueling infrastructure, for that matter), and few companies have more on the line in the context of CNG and LNG refueling.

Pickens' obvious bias, however, doesn't necessarily mean he's wrong about the crux of the debate surrounding NW Natural's petition for HPGS. The question is a relatively straightforward one: Does the utility's regulated monopoly of the natural gas delivery market in the region extend to other commercial activities associated with natural gas? Should it?

Pickens doesn't think so, and he isn't alone. The debate about NW Natural's plans has proceeded quietly since the utility introduced its petition this summer. Various stakeholders, such as Clean Energy peers (and competitors) TruStar Energy and Trillium CNG, have provided testimony and comments to the Oregon Public Utility Commission that are critical of HPGS. Pickens' opinions often simply rise above others' voices, shedding light on what might otherwise be a dull docket item for the regulator.

The fact of the matter is that all third-party CNG and LNG refueling developers – along with the entire refueling supply chain – have a stake in what happens regarding HPGS. How could the likes of Clean Energy, TruStar Energy, Trillium CNG and the countless other third-party station builders possibly compete with NW Natural's natural gas prices? The latter buys gas on the wholesale market. The former would all be buying gas from NW Natural.

The consumers in NW Natural's territory, whether fleets or everyday auto buyers, also have a stake in this issue. Competition is, generally, a good thing, in terms of forcing companies to elbow their way into a burgeoning sector such as natural gas refueling and battle for an edge in price and service.

Just how much competition will actually take place in Oregon's is precisely what's being addressed in the state. Stay tuned.