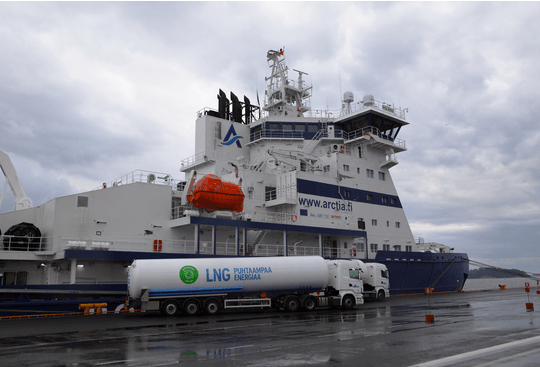 Skangas, which supplies liquefied natural gas (LNG) for shipping, industrial and heavy road transport needs, says it has made the first delivery of LNG for Polaris – the world’s first LNG-powered icebreaker.

According to Skangas, Polaris is a dual-fuel icebreaker using LNG as the primary fuel and diesel as a reserve fuel. The icebreaker was bunkered from two LNG road tankers at Helsinki’s Vuosaari Harbor on June 18 before its first sea trial on LNG.

“Polaris will provide a major increase in security for Finland’s winter navigation – with an added bonus of being powered with environmentally friendly LNG. We’re determined to ensure the efficient and reliable year-round operability of shipping for Finland’s businesses,” says Jarkko Toivola, head of winter navigation unit at the Finnish Transport Agency.

“Once Finland’s first LNG terminal is opened in August, the vessel can also be bunkered directly from the terminal, or bunkering can take place from road tankers at ports around the country,” says Tommy Mattila, Skangas sales and marketing director.

Skangas has an LNG production plant and terminal in Risavika, Norway; LNG terminals in Øra, Norway, and Lysekil, Sweden; and the Skangas terminal in Finland will be opened in August.