In a letter, 60 companies and organizations – including Cummins, Tesla, Trillium, Agility, Southern California Edison, and Pacific Gas & Electric – have joined forces to urge California Gov. Jerry Brown to sign a bill that would encourage more big rigs powered by clean fuels to operate on California highways and roads.

According to California clean transportation nonprofit CALSTART, current law restricts the gross vehicle weight of trucks to 80,000 pounds. Because the energy storage and fuel delivery systems for zero-emission (ZE) and near-zero (NZE) vehicles are presently heavier than diesel tanks, the restriction means that fleet operators who use cleaner technologies must carry smaller payloads, which creates a significant disincentive, CALSTART says.

The proposed bill, however, would increase the weight limit for ZE and NZE trucks to 82,000 pounds and thereby improve the business case for cleaner trucks.

The bill, A.B.2061, was introduced by Assemblymember Jim Frazier and is co-sponsored by CALSTART, the California Natural Gas Vehicle Coalition and the San Diego County Disposal Association. The legislation has passed out of the Assembly by 76-0 and the Senate by 37-1, enjoying strong bipartisan support, notes CALSTART.

The nonprofit notes that the bill would also speed up the improvement of air quality in disadvantaged communities that are often heavily impacted by polluting diesel trucks.

Further, says CALSTART, A.B.2061 addresses a critical barrier that could prevent the State of California from achieving its greenhouse-gas emission-reduction targets:

John Boesel, president and CEO of CALSTART, concludes, “A.B.2061 will enable the use of cleaner fuels in the trucks that are backbone of the California economy. Allowing big rigs to operate on cleaner fuels will provide significant air quality benefits to low-income communities that are often impacted by heavy truck traffic.”

The full letter can be read here. 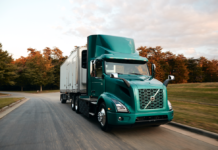