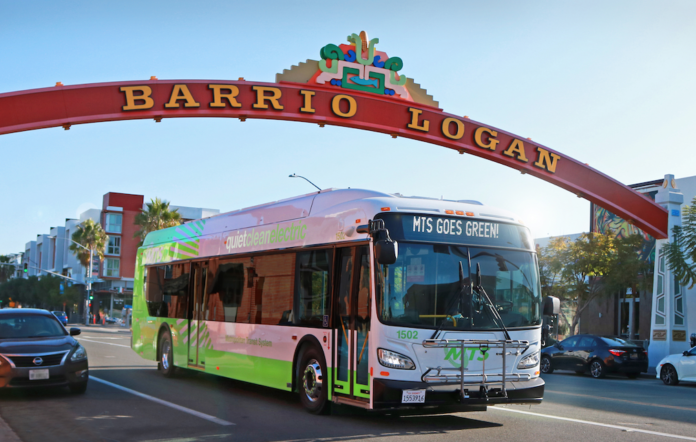 The San Diego Metropolitan Transit System’s (MTS) board of directors has unanimously approved a transition plan to convert all of the agency’s 800 buses to zero emissions by 2040.

The transition plan will now be sent to the California Air Resources Board for certification. State regulations require public transit agencies to gradually transition to all zero-emission bus fleets by 2040.

“MTS has been testing six electric buses in revenue service over the past 10 months and we’ve been very pleased with their performance,” says Sharon Cooney, CEO of MTS. “The performance data makes us confident that we can make a transition to an entire fleet of zero-emissions buses over the next 19 years, and continue to provide the highest quality of service our passengers expect and deserve.”

The transition plan approved by the MTS board will serve as the agency’s blueprint to get all vehicles in the fleet to zero-emissions. Some key components of the plan include:

MTS currently has six electric buses operating out of its divisions in downtown San Diego and East County. The agency will receive two more electric buses later this year. The electric buses have an average estimated usable range of 150 miles per charge. Many MTS bus routes are 150 miles or less, making them appropriate for this transition. Today, MTS’ 40- and 60-foot fixed-route buses are fueled by CNG.

MTS continues to operate about 95 bus routes and three trolley lines. Frequencies and spans have been restored to near-pre-COVID-19 levels.