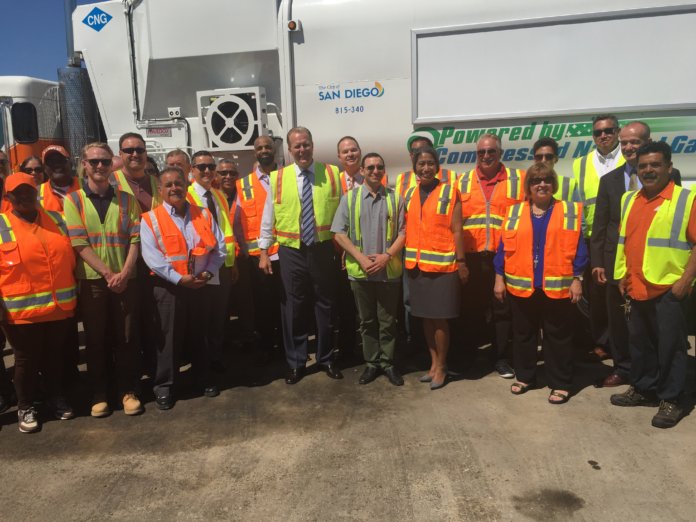 “We all know that vehicle emissions are the leading cause of air pollution, so the city is leading by example,” said Faulconer. “By transitioning to compressed natural gas, we’re making our fleet greener and saving money at the same time. This is a win-win for San Diegans and will help us reach our climate action goals.”

Last month, the city completed the second phase of construction on a new CNG fueling station at the Environmental Services Department’s Collection Services facility on Miramar Place. There are now 13 operational fueling posts that can each fill up two CNG vehicles simultaneously. The city currently has 20 CNG vehicles operating in its fleet that have already begun to use the new station.

Once fully built out, the station will allow the city to replace its existing fleet of 131 diesel-powered collection vehicles with CNG vehicles by 2022 – one of the goals in Faulconer’s Climate Action Plan – and reduce the amount of diesel fuel consumed by more than 1 million gallons annually.

In addition to the environmental benefits, CNG is significantly cheaper than diesel. Based on current fuel prices, this project will save the city between $1 million and $1.5 million annually in fuel costs once the entire fleet is fully converted. Estimates show that by constructing the facility and compressing the needed fuel for the vehicles, the city will be paying less than $1 per diesel gallon equivalent of natural gas compared to the average of $2.39 per diesel gallon.

“The city’s new compressed natural gas fueling station will truly benefit all San Diegans,” said Cate. “The collection trucks that residents see picking up their refuse and recycling bins will now be powered by cleaner fuel.”

“There are a number of benefits to using compressed natural gas, which is a plentiful resource in the United States and makes us less reliant on imported fuel,” said Mario Sierra, the city’s environmental services director. “Not only is it cheaper and cleaner than diesel, it will ensure that our collection trucks are much quieter while picking up trash and recyclables in our neighborhoods.”

There are two remaining phases to complete the fueling station. Once complete, the facility will have the ability to fill up to 152 vehicles simultaneously. The city also plans to purchase additional CNG vehicles – including 20 more in Faulconer’s fiscal-year 2018 budget proposal – as the existing diesel trucks reach the end of their useful lives, ultimately converting the entire fleet by 2022.

The total $5.3 million fueling station project is funded partially by a $250,000 grant from the California Energy Commission and $2 million from the city’s Recycling Enterprise Fund. The remaining costs will be covered by the city’s operating budget.