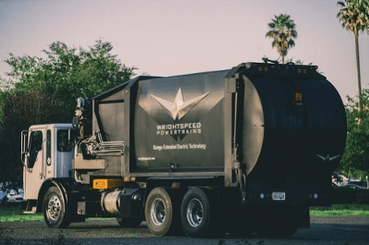 With the support of the Sonoma County Board of Supervisors, communities in Sonoma and surrounding counties will soon be serviced by a fleet of clean, quiet trucks from The Ratto Group, which are powered by Wrightspeed’s range-extended powertrain, The Route.

Designed to deliver economic, environmental and performance benefits in both OEM-installed new vehicles and existing fleet retrofits, The Route is a scalable solution that has been recognized by the state of California for its ability to help meet progressive climate and air quality mandates.

“In a business that puts a premium on reuse, this represents the ultimate in recycling. We’re literally recycling the recycling truck,” says The Ratto Group Chief Operating Officer Lou Ratto. “By integrating Wrightspeed’s powertrains into our existing commercial fleet, we’re initiating a progressive solid waste and recyclables collection strategy that will maximize the life of our vehicles, cut fuel consumption and emissions, and have a positive environmental impact on our service areas.”

“As an early adopter of our powertrain technology, Lou Ratto has solidified Sonoma County as a leader in pioneering new technologies that will improve and preserve the region for future generations,” comments Wrightspeed’s founder and CEO, Ian Wright, in a release. “We’re proud to collaborate with Lou and his team and to establish our powertrain technology as the economical and environmental choice for cleaner, quieter and more efficient communities.”

The Ratto Group’s fleet of refuse, recycling and compostable yard waste trucks currently serves more than 140,000 customers throughout Sonoma County, Mariposa County, the City of Novato and West Marlin. Looking ahead, Ratto and Wrightspeed say they will roll out more than 15 Route trucks over the next 12 months.

Wrightspeed notes that it was awarded $7 million in grants by the California Energy Commission to further develop technology for broad-based adaption of The Route.