In cooperation with supplier Neste Oil Corp., Sacramento-based Propel Fuels has announced it is selling renewable diesel at its retail locations across northern California under the brand name Diesel HPR.

Propel says Diesel HPR, which stands for ‘high-performance renewable,’ consists of 98.5% of Neste Oil's NEXBTL renewable diesel, a low-carbon fuel that can be used in any diesel engine.

According to Neste Oil, NEXBTL renewable diesel is produced by hydrotreating vegetable oil or animal fat and is classified as hydrotreated vegetable oil.

Propel says that Diesel HPR is designated as ASTM D-975, the standard for all ultra-low sulfur diesel fuel in the U.S., and is recognized as ‘CARB diesel’ by the California Air Resources Board. The company also claims Diesel HPR has 40% higher cetane than conventional diesel for smoother combustion and a quieter ride. 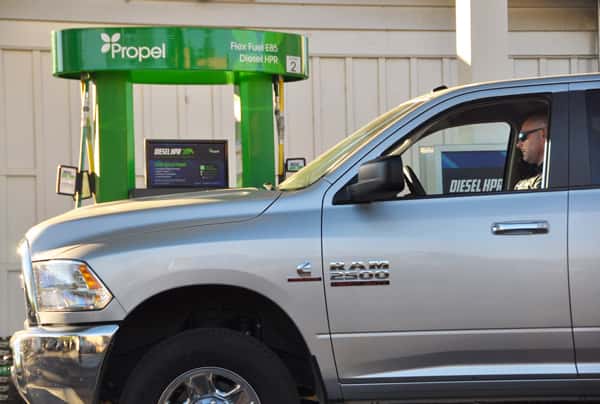 “Diesel HPR exceeds conventional diesel in power, performance and value,” says Rob Elam, CEO and co-founder of Propel. “Propel is committed to offering Californians the most advanced low-carbon fuels that meet our high standards for quality and value.”

“We congratulate Propel Fuels on their initiative to introduce Diesel HPR to consumers in California and are excited to be their supplier of choice with our NEXBTL renewable diesel,” comments Kaisa Hietala, Neste Oil's executive vice president of renewable products.

“We are pleased to see the introduction of a low-carbon fuel at California retail fueling stations,” states Tim Olson, energy resources manager for the California Energy Commission. “Our state needs several options to reduce greenhouse gas emissions in the transportation sector, and this cooperation between Propel Fuels and Neste Oil provides a tremendous opportunity to de-carbonize diesel fuel and help achieve our climate change goals.”