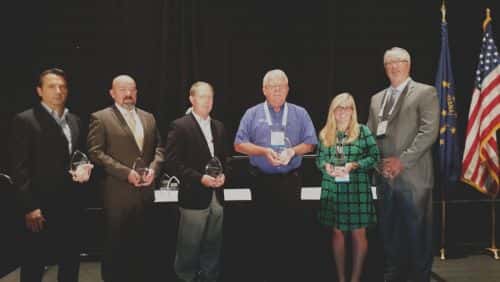 At this year's BusCon Expo in Indianapolis, the Propane Education & Research Council (PERC) partnered with METRO Magazine to recognize five transit fleets for their use of propane autogas.

Taylor presented the awards to attending representatives at a ceremony Wednesday morning in the Indiana Convention Center.

Groome Transportation operates in six states and has been using autogas since 2010.

“Our customers appreciate the value that we place on our business and the environment,” said Chris Groome, vice president of Groome Transportation. “We are achieving a greener fuel initiative while saving on cost.”

Inter-County Public Transportation Authority in North Carolina converted 15 vehicles to propane last December and plans to convert three more in the near future. To date, PERC says the fleet has saved more than $30,000 and anticipates reaching its return on investment within 12 months of its conversion.

LeeTran (Lee County Transit) in southwest Florida operates five dedicated propane paratransit shuttle buses and has 15 more on order. At today's fuel prices, the county estimates that it will save $14,000 in fuel costs with autogas when compared with diesel, and $25,000 when compared with gasoline, over the life of each vehicle.

VIA Metropolitan Transit has been utilizing autogas-powered vehicles in San Antonio since 1992. The fleet currently operates more than 100 dedicated autogas vehicles, including 14 trolleys and 124 vans.