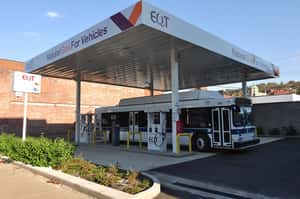 EQT Corp., an energy company with significant natural gas production operations in the U.S., says it is expanding a public-access compressed natural gas (CNG) refueling station in Pittsburgh based on increased demand.

The station, located at 2926 Smallman St., has been open since July 2011 and was pumping approximately 2,000 gallons of CNG per month at the beginning of last year. But by December 2012, that volume jumped to 15,000 gallons.

Initially, EQT's own natural gas vehicle (NGV) fleet consumed the majority of the station's output. Today, a number of other fleets – mainly the City of Pittsburgh, the University of Pittsburgh Medical Center, Paragon Foods and Veterans' Taxi – absorb about half of the facility's volume.

David Ross, EQT's vice president of demand development, tells NGT News that the company's 100 NGVs are mainly light-duty pickup trucks that are used in the field as a part of its gas production operations, An additional 100 bi-fuel CNG pickups are scheduled to come online by the end of this year, so NGVs will represent a sizable portion of the 1,400-vehicle fleet.

‘We're comfortable bringing on that other 100,’ Ross says, explaining that EQT's station isn't the only game in town – or in the region, for that matter. CNG refueling is popping up in all the states in which EQT operates, including Pennsylvania, West Virginia, Ohio and Kentucky.

Right now, EQT's Pittsburgh station has a pair of dual-hose fast-fill dispensers. The main equipment supplier is ANGI Energy Systems, and Ariel compressor technology and pressure vessels from CP Industries are on site.

The expansion will double the existing capacity to accommodate the simultaneous fueling of eight NGVs.

EQT notes that CNG is retailing for $1.89/GGE at the Smallman St. station.