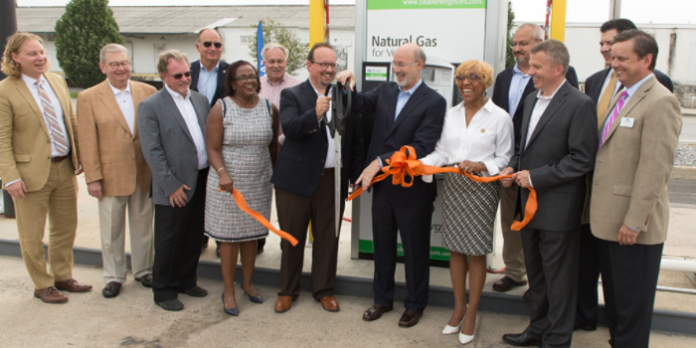 The CNG station, located at the intersection of Interstate 83 and Route 30, is a partnership between Shipley Energy of York and Clean Energy Fuels Corp of California. According to the governor’s announcement, the CNG station and five Shipley Energy CNG fleet vehicles received nearly $600,000 in state incentives.

“Using CNG to power vehicles for business fleets is not only environmentally smart – it also makes strong economic sense for the companies that take advantage of this Pennsylvania resource,” said Wolf at the ribbon-cutting. “Projects like this enable Pennsylvanians to benefit from our tremendous natural gas resources – which has significant impact on the commonwealth’s economic well-being and creates jobs.”

Shipley Energy, which owns the fueling station, received a $181,000 grant through the Natural Gas Energy Development Program from the Department of Environmental Protection to help with the cost of switching five fleet vehicles to CNG.

According to the governor, the commonwealth has invested more than $13.8 million to reimburse grantees statewide for the purchase or conversion of 713 heavy-duty vehicles, displacing over 8.9 million gasoline gallon equivalents per year.

In addition to fleet vehicles from Shipley Energy, other companies can use the CNG fueling pumps, as well.

“We are excited to be the vanguard of deployment of CNG for fleets to diversify their fuel resourses and to be more environmentally conscious,” said Matt Sommer, Shipley Energy president and chief operating officer. “CNG is cleaner, less expensive, and locally produced.”

Clean Energy Fuels Corp, which operates similar facilities across North America, received a $409,523 grant through the Alternative and Clean Energy (ACE) Program from the Commonwealth Financing Authority for construction of the pumps. The authority has approved 46 CNG or liquefied natural gas station projects through the program since 2013 for a total investment of nearly $25 million.

Pennsylvania has 83 open natural gas fueling stations, and an additional 40 stations are under construction or proposed.

“As the largest provider of natural gas fuel for the transportation industry, we understand the importance of partnering with companies like Shipley Energy, and states like Pennsylvania, which understand how important alternative fuels are in moving our nation’s freight,” said Andrew J. Littlefair, president and CEO of Clean Energy Fuels. “Natural gas offers significant greenhouse-gas reductions over diesel, and because of the significant grant programs offered here, along with the governor’s commitment to economic development, we believe that natural gas fueling in Pennsylvania is here to stay.”

In addition to the support, the Wolf administration is offering other tools to encourage the use of alternative fuel vehicles. The Alternative Fuel Incentive Grants (AFIG), awarded by the Department of Environmental Protections, has provided $10.6 million to 91 awardees to support the purchase or conversion for light and medium-duty natural gas vehicles, as well as propane and electric fleet vehicles of any size. The program has disbursed $3.8 million for the purchase or conversion of 563 vehicles.