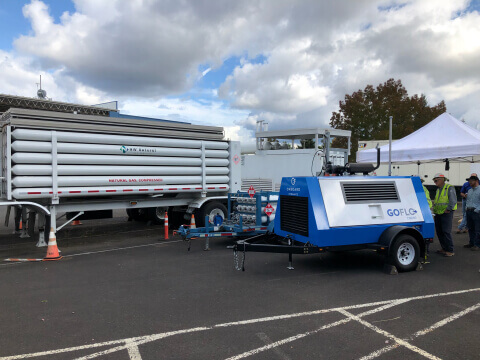 Onboard Dynamics has delivered its GoFlo CNG80 mobile compressor unit to NW Natural, an independent natural gas utility in the Pacific Northwest.

The initial GoFlo mobile compressor was delivered in September to NW Natural’s Sherwood, Ore., service center. The unit is being used to fill tube trailers for bringing compressed natural gas (CNG) to where it is needed throughout the company’s service territory. It can also be used to compress renewable natural gas into tube trailers at remote locations for injection into distribution systems.

“The GoFlo has a unique design that we feel will help to expand CNG adoption throughout the Northwest,” says Chris Kroeker, product manager for natural gas vehicles at NW Natural. “We’re excited to test its performance as we incorporate it into our operations.”

Unlike most CNG compressors that rely on electricity for power, the GoFlo uses natural gas as its power source, explains Onboard Dynamics. This feature gives companies the ability to deploy the unit in many different capacities. It can be moved to remote locations to assist with maintenance projects or can be used to quickly establish a CNG refueling station at locations where infrastructure doesn’t currently exist, the company says.

“We’re really enthusiastic to be working with NW Natural as they roll out our GoFlo compressor into their refueling network,” says Rita Hansen, CEO of Onboard Dynamics. “Their early adoption of our technology has helped us to successfully bring it to market.”