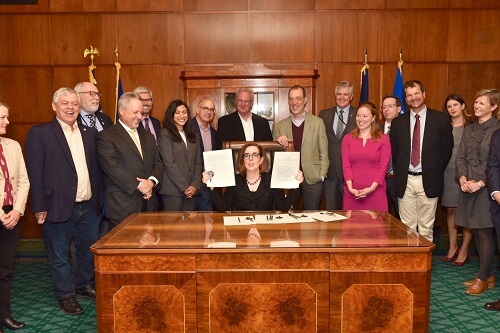 Gov. Kate Brown, D-Ore., recently gathered with NW Natural and other renewable natural gas (RNG) stakeholders to ceremoniously sign a bill that will allow Oregon utilities to acquire RNG on behalf of their customers.

NW Natural, a subsidiary of NW Natural Holding Co. and a natural gas service provider in Oregon and southwest Washington, worked with legislators to propose S.B.98 to create the path for RNG to become an increasing part of Oregon’s energy supply.

S.B.98 outlines goals for adding as much as 30% RNG into the state’s pipeline system. There will be limits on the total amount paid for RNG that is overseen by regulators – protecting utilities and ratepayers from excessive costs as the market develops.

“Oregon has long been a place for innovation in environmental protections, and this legislation continues that tradition,” says Brown. “Allowing our natural gas utilities to acquire a renewable product for their customers brings us one step closer to a clean energy future.”

“We couldn’t be more pleased to lead the way on this important step in supporting our region’s move to more renewable energy, closing the loop on waste and investing in homegrown solutions that address climate change,” adds David H. Anderson, president and CEO of NW Natural.

The new law sets voluntary RNG goals for Oregon’s natural gas utilities. Additionally, it allows utility investment in the interconnection of RNG production; supports targets of 15% by 2030, 20% by 2035 and 30% by 2050; and provides local communities a potential revenue source to turn their waste into energy. S.B.98 will support all forms of RNG, including renewable hydrogen, which is made from excess wind, solar and hydro power.

“S.B.98 is a groundbreaking piece of legislation,” states Nina Kapoor, director of state government affairs at the Coalition for Renewable Natural Gas. “Several states have advanced policies in recent years to support renewable natural gas; however, the Oregon law goes further than any other by setting clear goals for renewable natural gas procurement.”

NW Natural plans to begin accepting homegrown RNG into its pipeline system through several projects by 2020. Currently, the company is working with the City of Portland’s Bureau of Environmental Services, operator of the city’s Columbia Boulevard Wastewater Treatment Plant. Some of the RNG generated there will be used as fuel for city vehicles, while the remainder will be injected onto NW Natural’s system.