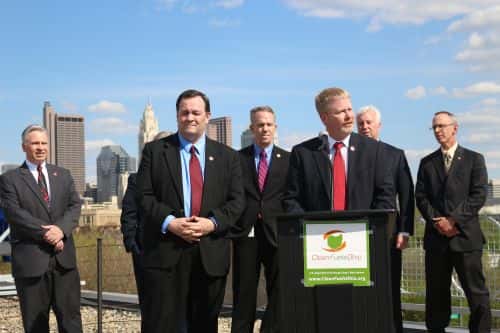 Ohio State Reps. Sean J. O'Brien, D-Bazetta, and Dave Hall, R-Millersburg, have teamed up again to reintroduce bipartisan legislation to incentivize the use of alternative fuels in the state.

On Wednesday afternoon, the two lawmakers and colleagues held a joint press conference at the offices of Clean Fuels Ohio, a statewide nonprofit organization that promotes alternative fuels, to officially announce the introduction of H.B.176.

“The impact of such legislation will be revolutionary for Ohio,” said Hall. “It will create jobs and support our economic recovery; it will be environmentally friendly, eliminate our dependence on foreign energy and act as an instant stimulus for all businesses and Ohio families by cutting their fuel bills almost in half.”

H.B.176 aims to promote the use of compressed natural gas (CNG) and other alternative fuels in the vehicles of individuals, businesses, and public transportation fleets on Ohio's roads through tax breaks and other incentives.

The new bill contains similar language to that in H.B.336, which O'Brien and Hall sponsored during the 130th General Assembly.

A key provision in the bill is the establishment of a new Gaseous Fuel Conversion Program, which would offer a tax credit for the purchase or conversion of natural gas vehicles and/or propane vehicles amounting to 50% of the cost of conversion or purchase price of the vehicle, or up to $25,000 (depending on the weight of the vehicle).

Furthermore, the program would award grants to state agencies, political subdivisions, school districts, public transportation systems and non-profit corporations to convert vehicles, at a maximum grant award of $500,000 per entity.

The bill also includes a provision to reduce the amount of sales tax due on the purchase or lease of a qualifying electric vehicle by up to $500.

“It's an important piece of legislation for both our economy and our environment,” said O'Brien. “By converting our fleets to run on CNG, we will see a reduction in harmful greenhouse gas emissions, more Ohioans will be able to save on their fuel costs, and we will be given the opportunity to make good use of newly discovered, abundant energy sources available right here in our state.”
Â
Last year, the lawmakers' previous bill passed through the Ohio House of Representatives with widespread, bipartisan support before dying in the state Senate Finance Committee. It is hoped that this new bill will receive similar support in the 131st General Assembly and eventually be signed into law.

The goal for Hall and O'Brien is that the bill will pass before summer break.