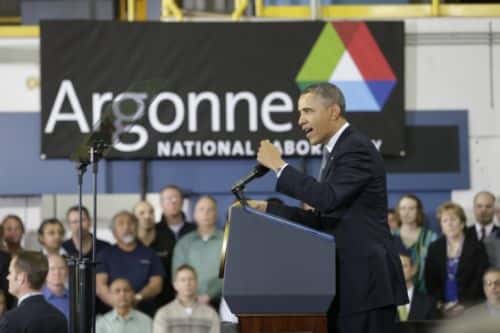 President Barack Obama was at Argonne National Laboratory on Friday afternoon to deliver remarks focused on his administration's energy policies, and a central piece of his speech was devoted to transportation and the federal Energy Security Trust – a proposal to funnel $2 billion into alternative fuel vehicle research and development.

The president first mentioned the trust idea during his State of the Union address last month, but details were scant. Obama provided a bit more clarity Friday afternoon, noting that the U.S. would ‘take some of our oil and gas revenues from public lands and put it towards research’ into natural-gas-powered transportation, biofuels, electric vehicle battery technologies and energy-efficient engine designs. Some of the trust funds would also support a handful of alt-fuel vehicle pilot projects.

‘Here at Argonne, and other labs around the country, scientists are working on getting us where we need to get 10 years from now, 20 years from now,’ Obama said. ‘Today, what most Americans feel first when it comes to energy prices – or energy issues – are prices that they pay at the pump.’

In concert with the formal unveiling of the trust proposal, the president also reiterated the administration's commitment to bolstering the use of alternative fuels – particularly natural gas – in medium- and heavy-duty trucking fleets.

Specifically, Obama is calling for a new five-year federal incentive program that would provide a 50% tax credit toward the incremental cost associated with buying dedicated alt-fuel trucks.

‘It's gratifying to see President Obama espousing the increased use of natural gas vehicles,’ said Richard Kolodziej, president of NGVAmerica, in a statement. ‘The natural gas vehicle market is already growing, but the vehicle incentives the president calls for would help accelerate that growth.’

During his address at Argonne, the president noted recent spikes in gasoline prices as a rallying point for more R&D in alternatives, and he also alluded to his administration's aggressive Corporate Average Fuel Economy (CAFE) target of 54.5 mpg by 2025 for passenger cars and light trucks as a step in the right direction.

‘In the middle of the next decade, we expect that you'll fill up half as often, which means you spend half as much,’ the president said. ‘Over the life of a new car, the average family will save more than $8,000 at the pump.’

Obama is advocating that the U.S. ultimately severs itself from petroleum-based transportation entirely. This is where the Energy Security Trust – and its hefty $2 billion kitty – comes into play.

Funding for the trust would, over the course of a decade, come directly from the revenues garnered from leases that oil and gas companies pay in order to conduct drilling and production operations on federal lands, both onshore and offshore. The initiative would not add an expense line to the federal budget, the administration says.

Securing America's Future Energy (SAFE), an organization that formed in 2005 to identify strategies for reducing the nation's dependence on foreign oil, originated many of the key concepts behind the Energy Security Trust. SAFE's Energy Security Leadership Council draws from the expertise of military leaders and private industry, including the chief executives of corporations such as FedEx, Coca-Cola, Waste Management and C.V. Starr & Co.

The ideas behind the Energy Security Trust are bold, but its path is currently uncertain. Congressional action will be required to divert federal funds to the trust, and observers say doing so could be an uphill battle.