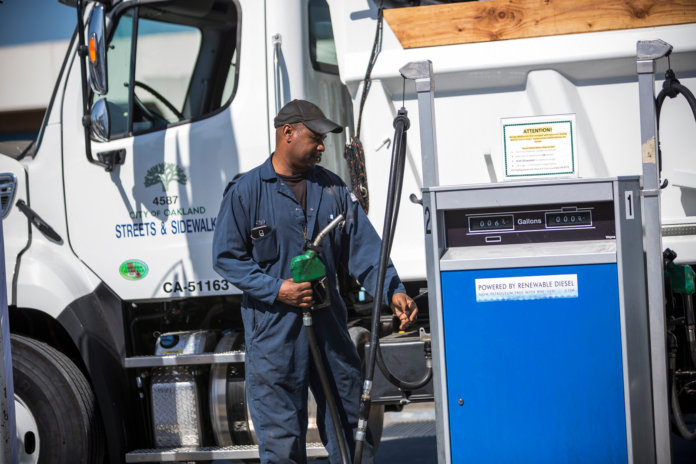 The City of Oakland, Calif., recently floated a tender for fuel suppliers, seeking bids on both unleaded gasoline and diesel, and specifying California Air Resources Board-approved renewable diesel for the latter.

Oakland switched its entire fleet of 366 diesel-powered vehicles to the non-petroleum drop-in fuel in October 2015.

“We flipped the switch overnight,” says Oakland fleet chief Richard Battersby, who also serves as interim assistant director of the city’s Bureau of Infrastructure and Operations. It has been a “cost-neutral” transition, he says, but “Competition is a good thing for pricing.”

The Oakland fleet includes fire emergency vehicles, refuse trucks and street sweepers, and such off-road construction and heavy equipment as backhoes, loaders and pavement millers – as well as stationary generators.

The East Bay region, Battersby says, “collectively used 2.5 million gallons last year… about a 10-fold increase from 2016 to 2017.” In addition to his work with Oakland, Battersby heads the East Bay Clean Cities Coalition.

RD differs from biodiesel, often qualified as FAME biodiesel (for “fatty acid methyl ester”), in that its production is based on hydrogenation rather than esterification. The latter, say RD advocates, results in a fuel that’s susceptible to cold-weather problems. It is most often used as a 20% blend with petroleum diesel known as B20. RD can be used straight.

Oakland’s RD has been supplied by Martinez, Calif.-based Golden Gate Petroleum, which delivered fuel produced primarily from waste fish oil by Neste in Singapore. Even including energy consumption related to trans-Pacific shipping, CARB gives the product a carbon intensity rating in the low 30s, compared with 98 for petroleum diesel.

“Not a single downside,” Battersby says, “other than availability for some areas.

“It’s the easiest fuel ever,” he says. “All you’ve got to do is switch suppliers.”

California’s Low Carbon Fuel Standard is the key to RD economics: LCFS credits allow the fuel to be sold as cheaply as – or cheaper than – petroleum diesel.

With the establishment of RD production capability in California, Oakland will invite other suppliers to bid for the city business, Battersby says.

“We’ve done presentations at over 50 fleet conferences, seminars and workshops, as well as NREL and DoE events, reaching over a thousand interested fleet and industry professionals,” Battersby tells NGT News. “Not a week goes by without someone reaching out to us.”

“He was an early user and really ran with it,” a close industry observer and longtime RD advocate in the San Francisco Bay Area says of Battersby.

Oakland is adding Chevrolet Cruze diesel sedans and hatchbacks to run on RD. The city has CNG, propane, and fully electric plug-in hybrid electric vehicles, too, Battersby says, with some of the latter charged at self-contained EV ARC charging stations by San Diego-based Envision Solar.

Bids under Oakland’s RFQ 100418 for Automotive Fuel are being accepted until March 28. Suppliers must be capable of delivering “varying quantities, ranging from as little as five gallons to as much as 5,000 gallons at one time.”

Photo: Fleet vehicles in Oakland have run exclusively on renewable diesel since October 2015. Courtesy of the City of Oakland

How much cheaper is this renewable diesel than regular diesel?