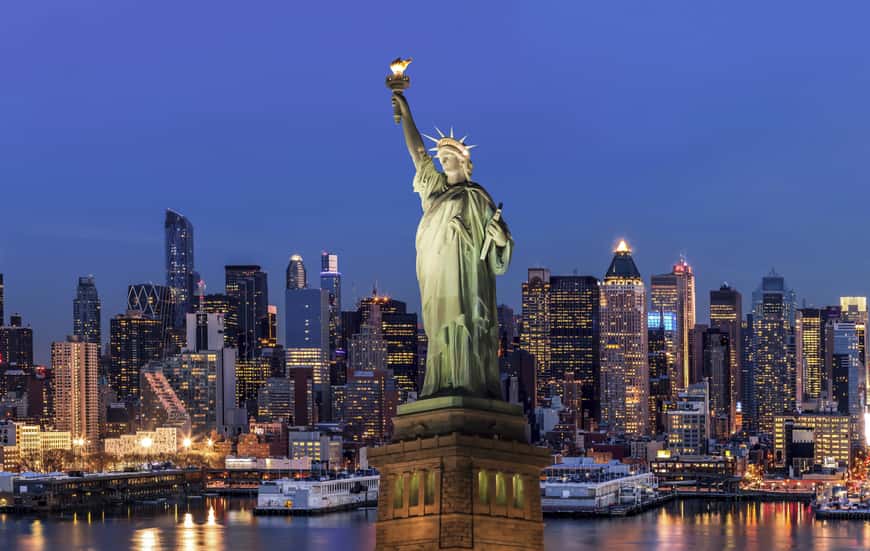 “New York City is standing up for future generations by becoming the first major U.S. city to divest our pension funds from fossil fuels,” says de Blasio. “At the same time, we’re bringing the fight against climate change straight to the fossil fuel companies that knew about its effects and intentionally misled the public to protect their profits. As climate change continues to worsen, it’s up to the fossil fuel companies whose greed put us in this position to shoulder the cost of making New York safer and more resilient.”

“This is a first-in-the-nation step to protect our future and our planet – for this generation and the next,” says Stringer. “Safeguarding the retirement of our city’s police officers, teachers, firefighters and city workers is our top priority, and we believe that their financial future is linked to the sustainability of the planet. Our announcement sends a message to the world that a brighter economy rests on being green. It’s complex, it will take time, and there are going to be many steps. But we’re breaking new ground, and we are committed to forging a path forward while remaining laser-focused on our role as fiduciaries to the systems and beneficiaries we serve.”

According to the press release, the mayor also announced that New York City has filed a lawsuit against five of the largest investor-owned fossil fuel companies. The release says the city will be seeking damages from BP, Chevron, ConocoPhillips, Exxon Mobil, and Royal Dutch Shell for what the city claims are billions of dollars it will spend to protect New Yorkers from the effects of climate change, including the costs of physical infrastructure and public health campaigns, among other mitigation efforts.

Citing “recently uncovered documents,” the city claims it is clear that the fossil fuel industry was well aware of the effects that burning fossil fuels would have on the planet’s atmosphere and the expected impacts of climate change as far back as at least the 1980s.

“The burning of fossil fuels is the single largest contributor to human-caused climate change. Unfortunately, those most responsible for the damage done to our planet have denied and buried this fact despite knowing it for decades,” argues Daniel Zarrilli, NYC’s senior director of climate policy and programs and chief resilience officer. “Today, after a decades-long pattern of deception and denial by fossil fuel companies, New York City is holding them to account.”

Some of the oil giants under attack have issued statements.

A Reuters report cites Exxon as saying, “Reducing greenhouse gas emissions is a global issue and requires global participation and actions. Lawsuits of this kind — filed by trial attorneys against an industry that provides products we all rely upon to power the economy and enable our domestic life – simply do not do that.”

Similarly, a Bloomberg report cites a BP spokesperson as writing, “We believe climate change is a complex societal challenge that should be addressed through sound government policy and cultural change to drive low-carbon choices for businesses and consumers, not by the courts.”

Meanwhile, a number of trustees of New York City’s $189 billion pension funds are onboard with de Blasio’s plans.

For example, Henry Garrido, DC37 executive director and NYCERS trustee, says, “For the sake of future generations, we support the call by the mayor and the comptroller for responsible divestment from fossil fuels. It is no longer a question of if, but rather how and when. The five-year goal is sensible.”

Bill McKibben, author and 350.org co-founder, says, “New York City today becomes a capital of the fight against climate change on this planet.”

“This is what climate leadership looks like,” adds Michael Brune, executive director of the Sierra Club.

“New York City is sending a powerful message that it will hold polluters accountable – on Wall Street and in the courts,” says Rhea Suh, president of the Natural Resources Defense Council. “While the Trump administration is doing everything it can to roll back the progress our nation has made in fighting climate change, leadership from cities and states is more important than ever. By investing in clean energy sources, cutting climate pollution and divesting from fossil fuels, New York City can offer a much-needed beacon of hope for a better tomorrow.”

Christiana Figueres, former head of the UN Framework Convention on Climate Change and architect of the Paris climate agreement, comments, “The exponential transition toward a fossil-fuel-free economy is unstoppable, and local governments have a critical role to play. There is no time to lose. It’s therefore extremely encouraging to see New York City step up today to safeguard their city and exercise their role as investors to protect their beneficiaries from climate risk.”