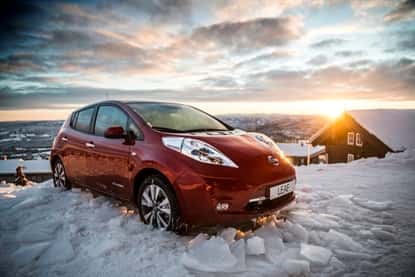 Nissan has released a short film revealing the new Nissan LEAF electric car with a larger 30 kWh battery pack from a sheath of ice in snowy Norefjell, Norway.

Nissan’s electric vehicle now delivers up to 155 miles of driving range on a single charge, as measured on the New European Driving Cycle, thanks to a new 30 kWh battery pack. That is 26% further than before, and the 2016 LEAF now comes with the latest evolution of the NissanConnect EV infotainment system on Acenta and Tekna trims. This includes improvements to the remote defrost feature, superior functionality and greater connectivity.

Norwegian ice specialist Mr. Iceman froze the Nissan LEAF into its icy blanket. “I have never frozen an electric car before, but it sounded like an interesting challenge, and I think the end result is stunning,”says Jack Stensland, CEO of Mr. Iceman.

The film also highlights the reliability and durability of the new Nissan LEAF 30 kWh battery, which Nissan says undergoes rigorous testing to ensure it is capable of withstanding even the most challenging driving conditions. Nissan also offers a specially engineered Nordic Pack, which includes a battery heater to counter the effects of the extreme low temperatures.

I live i Sweden and I have found that weather and corresponding climate settings has a tremendous toll on range. However, as also Peter points out, the calculated estimated range is dead-on. You shouldn’t have to run out of juice, unless you mean to (i.e. like Clarkson on Top Gear).

I’ve found the EPA mileages to be dead on accurate in the UK winter. I don’t know about summer yet. That said, to achieve these mileages (84m/107m) you have to drive at 55mph. If you drive at 75mph, you will get about 1/3rd less.

My son has a 2013 Nissan Leaf and on the second day he drove it (brand new), with 100% charge, it run out of power after 56 miles and had to be towed. Nissan has been stonewalling on the issue ever since. The comment from ‘Msean’ must be sponsored by Nissan.