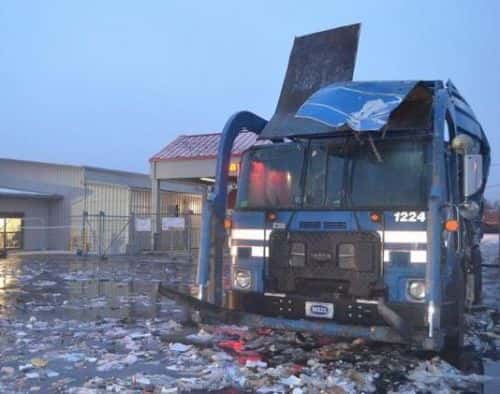 The Clean Vehicle Education Foundation (CVEF) has released new information related to its investigation of a natural gas vehicle accident that occurred on Jan. 27 in Indianapolis, confirming that two of five compressed natural gas (CNG) cylinders on a Republic Services refuse truck ruptured during a fire.

The CVEF also notes that although all five CNG tanks were equipped with pressure relief devices (PRDs), with one PRD at each end of each tank, ‘There is no evidence so far that these temperature-activated devices experienced sufficient heat input to trigger and relieve the gas pressure.’

Rather, the CNG tanks, which were situated atop the truck’s body, simply got hotter and hotter as the fire inside the hopper continued to burn, compromising the tanks. The ‘explosions’ that were initially reported were the instantaneous release of high-pressure gas – an extremely dangerous scenario, to be sure, but not an ignition of gases caused by a flame.

‘The fire in the trash hopper exposed the CNG fuel system mounted above the hopper roof to intense heat,’ according to the CVEF. ‘Prolonged, direct and intense heat can damage the structural integrity of CNG cylinders, ultimately resulting in a rupture if pressure is not relieved.’

It is usually standard procedure with any refuse truck – whether equipped with a CNG system or not – to dump the trash in the event of a fire in the hopper. But in this case, ‘The driver expressed concern over the proximity of power lines and stated he was unable to drop the trash load,’ the Indianapolis Fire Department reported at the time.

In turn, the fire smoldered inside the truck hopper for more than a half-hour. One theory is that firefighters’ efforts to control the blaze actually worked against the safety mechanisms integrated into the CNG system.

‘CNG cylinders are almost always equipped with protective covers that make it difficult to spray water directly on the cylinders,’ the CVEF says. ‘Direct or indirect water sprayed on the system in Indianapolis may have kept the PRDs below their intended trigger temperature.’

The CVEF confirms that the PRDs on the tanks ‘were designed and qualified in accordance with the ANSI PRD1 standard for CNG PRDs.’

The group further notes that the American National Standards Institute itself is aware of the limitations of PRDs in some circumstances, having acknowledged the Compressed Gas Association’s existing S-1.1 PRD standard.

‘When the heat transferred to the cylinder is localized, intensive and remote to the relief device, or when the fire builds rapidly, such as in an explosion, and is of very high intensity, the cylinder can weaken sufficiently to rupture before the relief device operates, or while it is operating,’ the S-1.1 standard reads.

The CVEF says that although the investigation is ‘far from complete,’ the organization wanted to alert the industry and first responders about its initial findings, as well as offer some recommendations – e.g., mandating CNG-specific training for drivers and first responders; establishing ‘a safe perimeter’ around an NGV fire, etc.