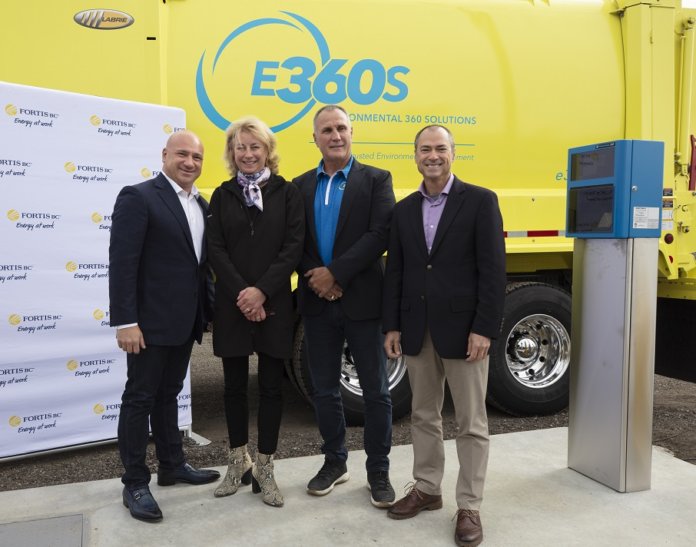 According to FortisBC, the new station, open 24/7, is ideally located to fuel medium to large CNG vehicles in the area. The project received funding from Natural Resources Canada.

Located on-site is a fueling station specifically for Environmental 360 Solutions Inc. (E360S), a waste-hauling organization that picks up residential curbside garbage and delivers it to the Glenmore Landfill, which is one of the many landfills that provide organic waste used by FortisBC to produce renewable natural gas (RNG). E360S will fuel its fleet of waste haulers from a dedicated fueling system.

“Having fleets adopt natural gas helps the province meet its greenhouse-gas (GHG) emissions reduction goals and improves air quality in the communities in which they operate,” says Sarah Smith, director of natural gas for transportation, regional liquefied natural gas and RNG with FortisBC. “By providing fleet owners and operators incentives to adopt natural gas, we’re reinforcing our position as an active partner and leader in reducing GHG emissions in British Columbia while also reducing costs for our customers.”

By adopting CNG, E360S expects to reduce its GHG emissions by approximately 25% each year. This is based on the minimum contracted amount of fuel from the station.

“E360S is dedicated to becoming North America’s most trusted environmental company, and we are proud to partner with FortisBC to provide the first public-access CNG fueling station in this region,” adds Danny Ardellini, founder and CEO of E360S. “The fueling station and our Kelowna CNG fleet are statements of our commitment to the environment and to reducing GHG emissions.”

Kelowna’s mayor, Colin Basran, says, “This is an important investment in Kelowna – one that contributes to our economy while also providing transportation companies with an option to lower carbon emissions. It’s great to see E360S using this fuel to take garbage to the landfill, where FortisBC converts organic matter into more renewable natural gas.”