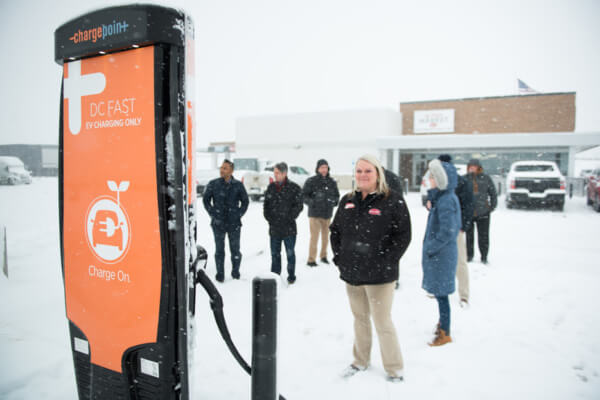 NATSO, representing the nation’s truckstops and travel plazas, the National Association of Convenience Stores (NACS) and the Society of Independent Gasoline Marketers of America (SIGMA), has urged Congress to oppose the Moving Forward Act, a $1.5 trillion infrastructure bill, ahead of the House vote.

The legislation includes a focus on climate change policies but includes provisions that will discourage private businesses from investing in electric vehicle charging infrastructure and stifle the market’s transition to electric vehicles (EVs).

Specifically, the groups oppose a provision that would carve out an exception for EV charging to the longstanding federal law prohibiting the sale of fuel, food and other services at rest areas. The federal ban on commercial activities at Interstate rest areas has incentivized businesses to invest in fuel stations just off of the U.S.’s highways since the inception of the Interstate Highway System. Private sector development of this national fueling network has ensured that drivers of gasoline-powered cars do not suffer from range anxiety. A similar approach would drive demand for EVs.

A second provision would allow investor-owned utilities to receive federal grants even if they have already raised rates on all of their customers to underwrite EV charging infrastructure investments. Fuel retailers will not invest in a technology where they have to pay for their own infrastructure and recover those costs while utilities can ‘double dip’ and have all of their investments covered by unwilling underwriters.

The three organizations said the Moving Forward Act reflects a short-sighted desire to build charging infrastructure as rapidly as possible without regard for the long-term implications for EV charging availability and undermines the legislation’s environmental objectives.

NATSO, NACS and SIGMA think that private sector involvement in the installation of EV charging stations is key to meeting the fueling needs of the motoring public. Many of the associations’ members are working to invest in that infrastructure. Collectively they represent hundreds of thousands of fuel retailers that sell approximately 90% of motor fuel sold at retail in the U.S.

The trade groups said infrastructure spending is a top priority and they remain eager to work with Congress to explore policies that encourage existing off-highway businesses to expand the full range of transportation energy offerings for consumers, including EV charging. In its current form, however, the Moving Forward Act will restrict those offerings.

The groups said that the bipartisan highway reauthorization bill passed last summer by the Senate Environment and Public Works Committee, which was supported by NATSO, creates a regulatory framework that is far more compatible with increasing investment in EV charging infrastructure than the House bill. The Senate EPW bill included grants for EV charging infrastructure along highway corridors but does not commercialize rest areas or encourage utilities to double-dip.

NATSO announced earlier this year that it formed the National Highway Charging Collaborative with North America’s largest EV charging vendor, ChargePoint, to add EV charging to more than 4,000 travel plazas in the next decade. The Moving Forward Act threatens that goal.

NATSO’s letter to Congress can be read here.