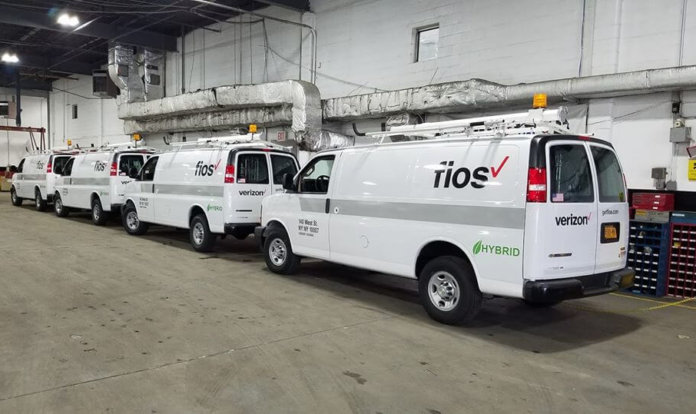 The New York State Energy Research and Development Authority (NYSERDA) and Verizon have announced that the giant telecommunications company has replaced 234 of its existing gas-powered vans with hybrid-electric vans for use in New York City.

Verizon purchased the new vans using rebates offered through the New York Truck Voucher Incentive Program. According to NYSERDA, it is the largest purchase of new vans in the history of the program and supports Gov. Andrew M. Cuomo’s aggressive clean energy goals to reduce greenhouse gas emissions 40% by 2030.

The 234 new Verizon vans feature technology installed by XL Hybrids Inc. and will increase fuel economy and reduce carbon dioxide emissions. While Verizon has upgraded some of its fleet to hybrids in the past, this is the largest commitment it has made to date and will help Verizon achieve its corporate goal of reducing its carbon intensity by 50% over the next decade.

NYSERDA President and CEO Alicia Barton says, “Verizon and XL Hybrids are terrific examples of how companies can take advantage of the state’s efforts to drive adoption of clean vehicles. Transportation emissions are the largest contributor to greenhouse gas emissions in our state, and efforts to transition fleets to lower-emission technologies are vital to meeting Governor Cuomo’s nation-leading clean energy goals.”

“Given the size of our company and the number of people we connect across the globe, Verizon has a unique opportunity and responsibility to have a positive impact on the environment,” says James Gowen, chief sustainability officer for Verizon. “We’ve deployed more than 24 megawatts of green energy capacity in the last five years, with plans to deploy 24 more by 2025. And with the addition of these hybrid vehicles, our fleet is as efficient as ever as we continue to use less fuel year after year. We thank NYSERDA for their partnership in helping to make this happen.”

“XL Hybrids is excited to expand its national relationship with Verizon. Because of the busy stop-and-go traffic in New York City, XL Hybrids’ technology is an ideal solution for Verizon’s 234 hybrid-electric vans,” comments Clay Siegert, co-founder and chief operating officer of XL Hybrids.

New York’s Truck Voucher Incentive Program provides point of sale rebates to reduce the cost for businesses and municipalities that want to purchase new clean vehicles or retrofit commercial vehicles and buses into hybrids, natural gas vehicles or zero-emission vehicles. Since 2013, it has provided almost 600 rebates for trucks and buses throughout the state. The rebate reduces the incremental costs of purchasing advanced alternative fuel technology heavy-duty trucks and buses by up to 80%.

DOT Acting Commissioner Paul A. Karas says, “The objectives of clean air and efficient transportation systems should go hand-in-hand. Creative initiatives like this one are incentivizing businesses to buy clean vehicles, helping to prime the market and improve the environment and quality of life for future generations.”

The program is part of New York State’s overall clean transportation strategy to reduce greenhouse gas emissions. Earlier this year, Cuomo announced the Drive Clean Rebate initiative, which has already provided more than $3 million in rebates to New Yorkers for the purchase or lease of electric vehicles. The state also launched a new electric vehicle campaign that includes the installation of charging stations and incentives for employers to encourage employees to drive electric vehicles, as well as the installation of charging stations along the New York State Thruway.

“New York State is a leader in advancing the commercialization of efficient, clean vehicle technologies, building a green economy, and enabling businesses to adopt solutions that are better for communities and the environment,” says CALSTART Northeast Regional Director Alycia Gilde. “As NYSERDA’s program administrator for managing the state’s Truck Voucher Incentive Program, we are seeing firsthand the benefits the voucher incentives provide to fleets like Verizon, while helping companies like XL Hybrids create a marketplace for smart, fuel-saving technologies. Verizon’s new hybrid fleet will not only help promote clean air, but serve as a role model to other fleets operating in New York City to go green.”

The 234 Verizon vans are Chevy Express 2500 models. The XL3 hybrid-electric system being used on the vans saves fuel through regenerative braking, a process by which the XL3 electric motor helps slow the vehicle when the driver brakes, charging the battery. When the Verizon driver accelerates, the battery releases the energy to the electric motor, helping propel the vehicle. NYSERDA notes the XL3 hybrid-electric technology leaves the Chevy engine, transmission, fuel system and exhaust system, as well as the complete Chevy warranty, completely intact.