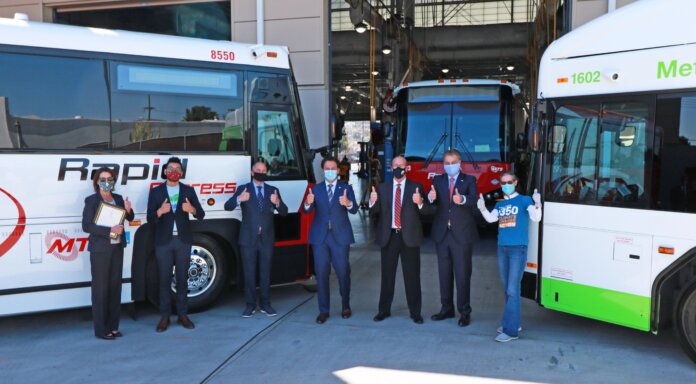 The San Diego Metropolitan Transit System (MTS) has officially retired the last of its diesel buses and added two more electric buses to its fleet. The agency has a long history of adopting clean fuel technology and is on a path to convert its entire bus fleet to zero-emissions by 2040.

“MTS retiring the last of its diesel buses from its fixed-route fleet is a monumental leap forward in air quality,” says Nathan Fletcher, board chair of MTS. “It represents our commitment to environmental justice, sustainability, air quality and to achieving ambitious environmental standards.”

At the same time as retiring the diesel fleet, MTS also added two GILLIG zero-emission battery-electric buses, upping the agency’s total to eight. MTS began its zero-emission bus pilot program in 2017 and intends to complete a full transition to 100% zero-emissions fixed-route vehicles by 2040. The two California-made GILLIG buses are the first of seven to be delivered to MTS.

GILLIG’s zero-emission battery-electric buses are equipped with the state-of-the-art Cummins electrified powertrain and are supported by a nationwide service network. Built on GILLIG’s low floor platform, the buses ensure parts and training commonality with MTS’s existing GILLIG fleet. Equipped with six onboard batteries, each bus has a battery capacity of 444 kWh, providing an estimated range of 140 miles. The buses utilize energy recovered from a regenerative braking system and feature a direct-drive traction motor with a peak torque of 3500 Nm (2,582 lbs.-ft.).

Other milestones in MTS’ efforts to improve air quality through its fleet include:

-Embarking on a path towards full zero-emissions by the year 2040 or sooner
-Becoming one of the first transit agencies in the U.S. to move to a CNG bus fleet in the early 2000s
-Using a renewable form of natural gas sourced from waste to fuel its entire fleet of 40-, 45- and 60-foot fixed-route buses
-Transitioned to eco-friendly propane gas for its minibus and paratransit fleet