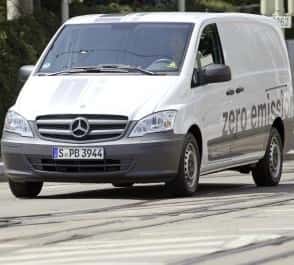 The company explains that a large number of Vito E-CELLs have been deployed in Germany – 50 each in Stuttgart and Berlin. The EVs are being used in courier, corporate and other fleets, as well as running as service vehicles in companies' maintenance and customer-service operations. These two projects are scheduled to continue through 2014.

Daimler notes that Berlin and Stuttgart have different terrain, with the former being largely flat and the latter having elevation changes of about 1,100 feet within the city limits. Stuttgart has presented ‘a real stamina test for the range, recuperation performance and drive properties of the Vito E-CELL,’ the company notes, adding that drivers have reported that the EV has performed well in terms of range and other elements.

‘In both regions, the drivers' assessment of the Vito E-CELL has been highly positive,’ Daimler says. ‘Characteristics of drive performance, tractive force, steady acceleration without shifting gears and continuous braking were all rated favorably.’

In terms of vehicle charging, Mercedes-Benz has worked with electric utilities Vattenfall and EnBW to test new in-vehicle technologies related to charging the Vito E-CELL's bank of lithium-ion batteries, as well as to install charging stations. Additionally, Vattenfall and EnBW both host charging systems at their headquarters.

All fleet participants also have charging stations on site, Daimler explains. These devices, which feature charge-management tools to better integrate with the local electricity grid, operate at 380/400 V. From a depleted state, the EV's batteries assume a full charge in no more than six hours.

That charge yields a range of approximately 50 miles, which field-test drivers in Stuttgart have rated as either ‘good’ or ‘satisfactory,’ the company says. The Vito E-CELL's range is bolstered by regenerative-braking technology, which charges the batteries using brake energy while the EV is in use.

Going forward, Mercedes-Benz plans to deploy the Vito E-CELL in other parts of Germany, as well as in most western European countries. About 2,000 of the vans were produced through the end of last year to support this roll-out.