Home Up Front Longstanding CNG Refueling Site Gets A Makeover 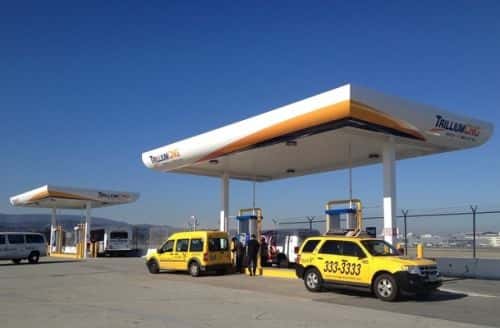 ‘We thank the airport for renewing our lease and are glad to be able to support its environmental stewardship by providing clean, domestic and abundant natural gas for the many natural gas vehicles that serve the airport daily,’ says Mary Boettcher, president of Trillium CNG.

‘The San Francisco International Airport has been an industry leader through its '100% Clean Vehicle Policy,'’ adds John L. Martin, Airport Director. ‘There are currently over 600 buses, vans, taxis and autos which run on compressed natural gas at SFO.’

Trillium says the facility at the airport, at 50 Old Bayshore Highway, is one of the largest public-access CNG stations in northern California. The recent upgrades included new fueling islands and canopies, as well as updated signage and new CNG dispensers. There are eight fast-fill fueling lanes at the facility.