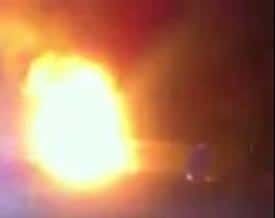 Kane Is Able Inc., a national third-party logistics company headquartered in Pennsylvania, has filed a lawsuit against Volvo Group North America alleging the truck manufacturer will not honor its warranty obligations following a compressed natural gas (CNG) tractor fire that occurred earlier this year. Avery Vise, a Volvo spokesperson, tells NGT News the claims against the company ‘are without merit.’

According to the lawsuit, which was filed in U.S. District Court for the Middle District of Pennsylvania, one of Kane's seven Volvo CNG tractors caught fire and exploded on Interstate 81 in Harford Township, Pa. Alex Stark, Kane's senior director of marketing, says no one was injured during the Jan. 2 incident, but the truck, attached trailer and customer cargo ‘were a total loss.’

Kane took delivery of the Volvo VNL64T300 daycab units, its first and only CNG tractors, in July 2014. The vehicles feature 11.9-liter ISX12 G natural gas engines from Cummins Westport Inc., as well as CNG tanks and fuel delivery systems manufactured and installed by Agility Fuel Systems Inc. In addition to Volvo, the lawsuit names both Cummins Westport and Agility.

Among its several allegations, Kane claims Volvo has refused to pay for or replace the equipment lost in the fire and provide reimbursement for related costs.

“Volvo expressly warranted the units for one year from the date of delivery or 100,000 miles,” says the complaint. “The subject fire occurred five months after delivery, at which time the vehicle had been driven only three thousand miles.”

As for the cause of the incident, the lawsuit claims, “The subject fire was caused by intense heat emanating from the exhaust system of the tractor which ignited paint, fiberglass and/or other combustibles in the vicinity of the exhaust system.”

Vise emphasizes that the tractor involved in the fire “was equipped with an engine not manufactured by Volvo. In addition, the fuel tanks were neither manufactured nor installed by Volvo.”

“However, Volvo thoroughly investigated this incident in conjunction with the engine and tank manufacturers, keeping both the customer and [the National Highway Traffic Safety Administration (NHTSA)] fully updated throughout,” he continues. “Volvo provided the customer with rental units at our cost to support their operations while the investigation was pending.

“After extensive investigation, we were unable to identify any defect in the design, materials or manufacturing in any of the components installed by Volvo,” states Vise. “Our testing found no support for the cause of the fire suggested by Kane.”

Luis Salem, an Agility spokesperson, says, “Based on our investigation, we do not believe the fuel system caused or contributed to the incident.” Salem notes the company has no further comment on the pending litigation.

A Cummins Westport spokesperson says, ‘Cummins Westport confirmed that the engine and all related systems were operating normally and reliably, and were not contributing factors. Cummins Westport and both parent companies continue to be committed to providing the highest-quality products and services to our customers.’

Kane also claims the affected Volvo tractor “was negligently manufactured and/or designed” and cites a voluntary recall in its lawsuit.

Vise says, “The recall mentioned in the complaint was not a Volvo vehicle recall, but rather a February 2014 Cummins engine recall, which affected multiple vehicle OEMs.”

According to an NHTSA document, Cummins Inc. and Cummins Westport Inc. did recall certain ISX12 G engines manufactured Feb. 19, 2013, through Feb. 2, 2014. The document says, “Condensation in the intake manifold may freeze during cold weather conditions and interfere with the proper operation of the intake manifold pressure sensor.”

“The improper operation of the sensor could induce elevated exhaust temperatures or flames from the exhaust pipe, increasing the risk of a fire or burn injury to a person near the exhaust pipe,” the document continues.

Nonetheless, Vise maintains that Kane's CNG tractors were not affected by that recall.

“After inspecting the remaining Kane trucks, Cummins assured Volvo and Kane that the engines were not part of that recall and had, in fact, been manufactured with the corrective measures implemented by Cummins as a result of the recall,” says Vise.

Since the fire incident in January, Kane has not operated its remaining Volvo CNG trucks, and the logistics firm is also suing for the value of those units.

“As a result of the tractor malfunction, Kane has suffered, and will continue to suffer, a loss of use of the remaining six tractors, which it cannot operate due to risk of fire, personal injury and property damage,” says the complaint.

Kane's Stark claims, “We received no indication from anyone of what caused the fire and that the vehicles are safe to drive.”

Meanwhile, Vise contends, “Safety is a core value for Volvo, and we worked closely with our supplier partners to thoroughly examine the vehicles Kane decided to park – this investigation convinced us that the vehicles should be returned to service.”

As mentioned earlier, the seven Volvo tractors were the logistics company's first CNG vehicles, and Stark explains, “Kane believes CNG will be a viable solution as truck prices fall more in line with diesel trucks and infrastructure is built to support those entering this new technology.”

At this time, however, Stark says the company has no plans to purchase more CNG vehicles.

Notably, Kane says a passerby took a video of the January incident and sent it to the company, which has posted the footage on YouTube here. (The cover photo for this story was taken as a screenshot from that video.)