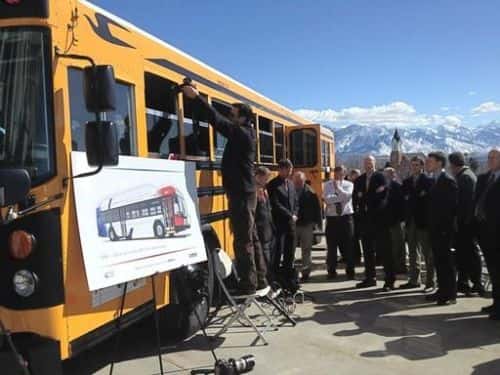 Earlier this week, Utah Gov. Gary Herbert, state legislators and many other stakeholders sandwiched themselves into a full-size Blue Bird compressed natural gas (CNG) school bus parked outside the state capitol building in a show of support alternative fuel vehicles.

The central occasion for convening this group was to announce the debut of S.B.275 – legislation introduced into the state Senate by Republican J. Stuart Adams, the majority whip. The bill proposes amendments to Utah's energy policy that will kick off a dialogue about how to best add more alt-fuel vehicles and refueling infrastructure in the state.

The process is just beginning, but S.B.275 was discussed and passed by a 3-2 vote in the Senate Natural Resources, Agriculture and Environment Committee on Wednesday night. One provision is a mandate for the Public Service Commission of Utah to formally explore all options for ‘advancing and promoting measures designed to result in cleaner air in the state.’

In this regard, the commission will not only help define which public and private entities are best suited to propel Utah's alt-fuel sector – natural gas utilities, local governments, etc. – but will also spearhead the examination of potential funding sources for building refueling infrastructure, alt-fuel vehicle maintenance facilities and other critical assets. A core theme of the group's work will be identifying ‘the most effective ways to overcome any obstacles to converting to alternative fuel vehicles.’

S.B.275 also lays the groundwork for the formation of an ‘interlocal entity’ that will work hand-in-hand with the commission on devising the state's alt-fuel strategies. This entity – which will include as-yet-unnamed representatives from state, county and local governments, as well as a school and public transit fleet and natural gas company – would be authorized to mobilize funding that supports the build-out of alt-fuel vehicle facilities.

But perhaps most compelling is a measure designed to give natural gas utilities a path toward cost recovery for the development, operation and ongoing maintenance of natural gas refueling stations and associated facilities. Through their regular rate-case processes, gas companies such as Questar will be able to seek recovery of up to $5 million annually.

During the press conference on Monday, Herbert was bullish about natural gas, according to coverage from local media outlet KSL. ‘Natural gas will help us bridge that transition from carbon-based fuels to others,’ he said. ‘Who knows what the possibilities will be down the road as we try to get cleaner fuels?’

If two-thirds of both the House and Senate approve the bill, the legislation will go into effect immediately upon the governor's signature.

Photo courtesy of the office of Gov. Gary Herbert, @governorherbert