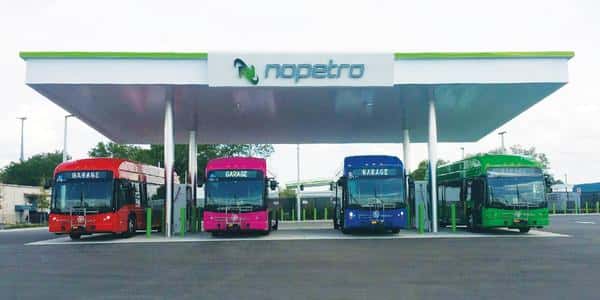 Located at the intersection of John Young Parkway and LYNX Lane, the new CNG fueling station is part of a public-private partnership (P3) with the Central Florida Regional Transportation Authority (LYNX). The six-acre facility, which includes five CNG dispensers with the capacity to distribute 40 gallons per minute, comprises two stations within one location – a private station for LYNX and a second station open to the public at large.

As part of the P3 agreement, Nopetro built the CNG fueling station and upgraded the maintenance facility. The fueling facility is privately funded and also includes a shared-revenue component with the regional bus service. TECO Peoples Gas, another partner in the protect, was responsible for bringing the natural gas utility service to the project.

Under the terms of the P3 agreement, switching from diesel to CNG is expected to provide LYNX with annual positive returns. LYNX is projected to have more than 150 CNG buses on Florida’s roads within the next five years.