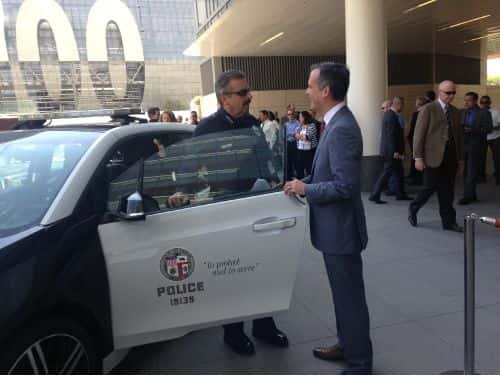 The program allows city departments to lease BEVs and PHEVs to replace aging city vehicles, including those with conventional internal combustion engines.

The police department (LAPD) is also being loaned a Tesla Model S P85D and a BMW i. These vehicles will be used for testing and research by LAPD technical experts to determine how the technology can support their future needs. The department has also already purchased 23 electric scooters and three electric motorcycles for use by patrol officers.

One-hundred of the BEVs will be dedicated to the LAPD and used by detectives, investigators and administrative employees. The LADWP will lease 44 BEVs and 113 of the PHEVs.

Last year, Garcetti issued the Sustainable City pLAn, a blueprint to make Los Angeles more sustainable and deliver environmental and economic benefits to the city. These leases will deliver on the pLAn's commitment to ensure that 50% of the city's annual light-duty vehicle purchases are EVs by 2017.

This announcement is also a big step toward the pLAn's longer-term target to have 80% of city vehicle fleet purchases be EVs by 2025, the mayor says.