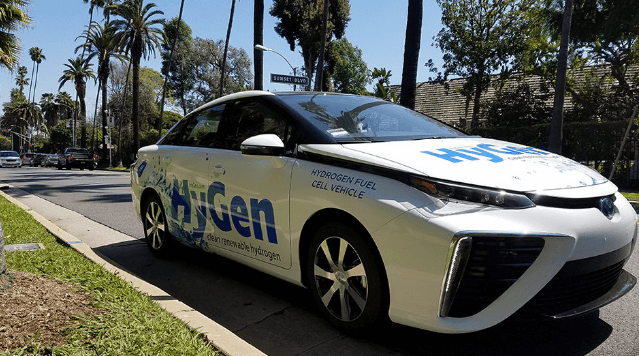 HyGen Industries Inc., a supplier of renewable hydrogen for fuel cell electric vehicles (FCEVs), says it has filed a public offering to raise $20 million under Regulation A+ Tier 2 – updated under the Jumpstart Our Business Startups (JOBS) Act – as the next phase of its fundraising strategy to support renewable hydrogen infrastructure.

As reported, this news follows HyGen’s $5.3 million award from the California Energy Commission to build renewable hydrogen fueling stations. The company’s equity offering is a chance for accredited and unaccredited investors alike to take advantage of new crowdfunding rules to advance the much-needed infrastructure.

According to HyGen, the company’s zero-emission stations will service the new line-up of FCEVs from companies such as Toyota, Hyundai, Honda and others. HyGen’s clean and renewable production method involves purchasing renewable electricity and creating hydrogen, via water electrolysis, at partner gas stations. FCEVs complete the cycle, emitting only water vapor into the atmosphere, contributing zero carbon emissions.

“HyGen is excited to offer the public an opportunity to invest in a carbon-free alternative to fossil fuels for transportation,” says Paul Dillon, CFO of HyGen Industries. “We firmly believe that the JOBS Act provides an ideal opportunity for small investors to become stakeholders in companies generating a positive impact. Our offering allows millions across the U.S., and the world, the chance to vote with their pocketbook for cleaner transportation.”

The state of California has already made headway establishing zero-emission FCEVs and a viable hydrogen station network. HyGen is adding to this nascent infrastructure, noting that all its fuel is 100% carbon-free and renewable.

Available on StartEngine, a premiere equity crowdfunding platform, accredited and unaccredited investors can purchase shares and contribute to the building of clean, renewable hydrogen stations across California.