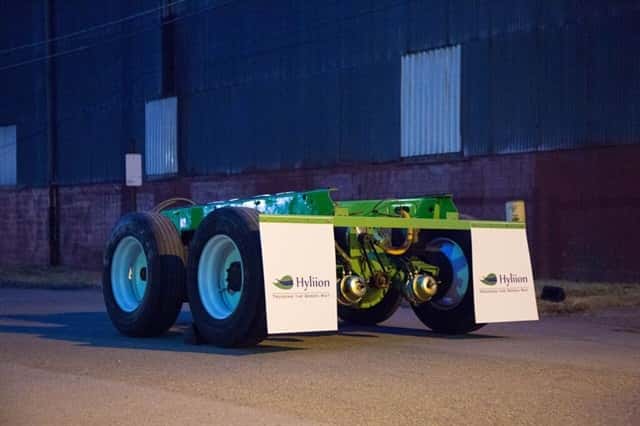 Hyliion, a start-up from Carnegie Mellon University, is developing a hybrid trailer concept for long-haul semi-trucks that it claims could improve fuel economy by over 30%. The Hyliion Suspension System hybridizes the trailer portion of a tractor-trailer combination, using regenerative braking to capture power when the trailer is slowing down and reuses that energy to power the trailer upon acceleration.

The Hyliion system is designed to replace any industry-standard sliding suspension beneath a trailer, with the company claiming that installation takes under an hour. Once equipped, the Hyliion Suspension System’s regenerative braking technology combines with an improved aerodynamics package and reduced engine idle time to reduce fuel consumption by over 30%.

The Hyliion system costs $500 per month, but the company claims it can save drivers about $1,300 per month in fuel costs. The hybrid system is currently undergoing road tests and, according to Hyliion, should be ready for sale sometime in 2017.

Hyliion says that its hybrid trailer could reduce fleet operating costs by 10%, improve a tractor-trailer’s average fuel economy to 8.5 miles MPG and save the average truck driver $15,600 a year. If the entire trucking industry were to equip the Hyliion suspension system, it would result in a 10% decrease in overall emissions from the transportation sector, a 2% reduction in the U.S.’s total energy usage, and a 2% reduction in overall carbon emissions, according to Hyliion.

In 2015, Hyliion won $50,000 for its hybrid trailer concept at the National Clean Energy Business Plan Competition in Washington, D.C.