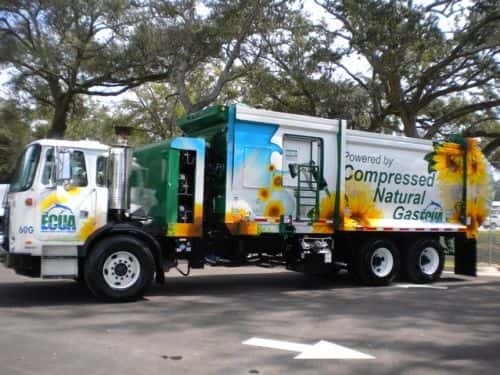 Municipal natural gas utility Pensacola Energy, the Emerald Coast Utilities Authority (ECUA) and a number of other fleets on the western-most edge of the Florida panhandle are making the move to convert their vehicles to compressed natural gas (CNG) power.

Of course, critical to any successful deployment of natural gas vehicles (NGV) is the creation of adequate refueling infrastructure. Pensacola Energy and ECUA's long-term plans included building three CNG stations – the last one is scheduled to be complete in December. Zeit Energy, based in Dallas, was contracted to build the facilities. 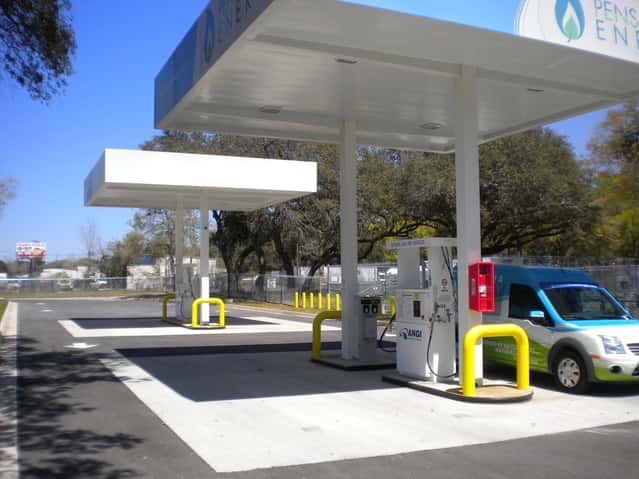 The heart of the station consists of two ANGI Energy Systems compressor packages that produce a total of 300 DGE of CNG per hour.Â A three-pack storage rack holds 270 DGE, of which 90 is usable. A XEBEC regenerable single-tower natural gas dryer is used to ensure that quality gas is delivered to the NGVs.

Two FuelMaster card readers provide a reliable method of tracking sales. Customers can use fuel keys or pay by credit card. The FuelMaster system has been programmed to recognize an in-state and out-of-state NGV and to bill the appropriate taxes (based on the ZIP code of the card used). At the end of each month, Pensacola Energy downloads all the information necessary to bill fleet customers and remit state and federal excise taxes.

Palafox Station: This February, Pensacola Energy opened a private-access station for City of Pensacola's fleet vehicles. The combination of time-fill (seven posts) and fast-fill (one hose) refueling meets the needs of 21 NGVs. (Five refuse trucks are the exclusive users of the time-fill component.)

Providing compression for the facility is one ANGI Energy Systems NG50E compressor that generates 36 GGE/hour, with a rack of 18 storage bottles holding 86 GGE (of which 29 GGE is usable). A XEBEC regenerable single-tower natural gas dryer is used at the site, where the fast-fill rate is 3-4 GGE per minute using the compressor and storage, and the time-fill rate is 32 DGE/hr. 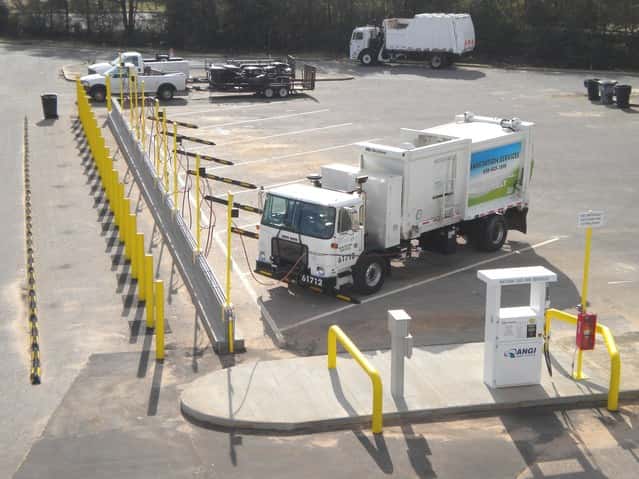 The station currently dispenses approximately 3,000 DGE monthly, and that amount is expected to increase steadily.

Ellyson Station: A second public-access station, located at 3320 Copter Rd. on a retired naval base, is expected to be operational by the end of 2013. This facility is strategically located to serve the numerous trucking companies that currently operate out of a nearby industrial park, as well as the NGVs that go in and out of ECUA's maintenance facility.

Situated on the east side of Pensacola, this station helps to complete Pensacola Energy's long-term strategy to provide CNG to Escambia County, with fleets no longer having to rely on a single station on the west side of town.Â

The majority of the vehicles are considered OEM, with CNG up-fits having been performed by various companies: IMPCO, Altech-Eco and BAF Technologies (now Westport). The Chevy 1500 was the only vehicle converted after taking delivery, and that conversion was performed at Phoenix Energy in Birmingham, Ala.

ECUA's vehicle replacement schedule is 15 to 20 vehicles annually over each of the next five to six years. That said, many more NGVs are coming to ECUA.Â

ECUA plans to retire 30 diesel-powered refuse trucks over the next five to seven years, as well as to continue replacing light- and medium-duty vehicles – about 100 of them.

Rush Trucking in Mobile, Ala., has been instrumental in supplying semi-tractors for the wide range of applications that ECUA requires. In 2012, two tractors were delivered: a Peterbilt Model 365 for pulling various trailers and a Peterbilt Model 384 crew cab that operates as a service vehicle. 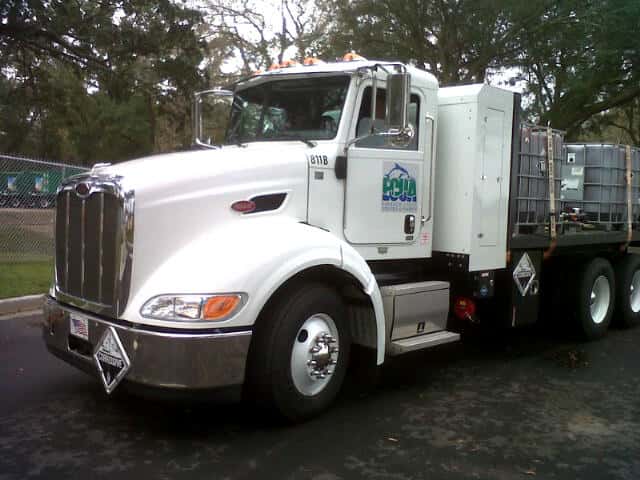 In July, another Model 365 was delivered, and a Peterbilt Model 384 sewer-vacuum truck will be delivered in November. All of these vehicles are powered by Cummins Westport ISL G engines.

Escambia County: The county has a fleet of 15 Ford F-150 trucks and, as opportunities arise, will be switching additional vehicles to CNG. The construction of the second CNG station on the east side of Pensacola will facilitate additional conversions, as their central maintenance facility is located in the vicinity.

City of Gulf Breeze: The city of Gulf Breeze is a neighboring Pensacola community that operates nine NGVs. Their fleet consists of three Chevy 2500 vans, two F-250 trucks, a pair of Ford Fusions, one E-250 van and one E-350 Van. All of these vehicles, with the exception of the Fusions, are dedicated CNG models.

The city has also pursued its own CNG refueling capacity, having recently completed the installation of a Simpkins Energy compressor equipped with two time-fill hoses. This unit is rated at 5 GGE per hour.Â

Although it is still somewhat early to document the exact savings realized by the local fleet operators, ECUA – which has the largest fleet in the region – expects to save approximately $1 million in annual fuel costs and $350,000 in maintenance. The organization's older diesel-powered trucks were very inefficient, requiring constant maintenance of the emission systems. NGVs resolved that issue, and the CNG refuse trucks saw a fuel economy increase of 50%.Â

Fleet operators running smaller vehicles such as sedans and light/medium-duty trucks report maintenance costs equal or less than their diesel/gasoline counterpart. And, with all the fleets, the fuel savings per DGE is averaging $1.60, with a published price at the station of $2.05/DGE.Â

It is notable that NGV maintenance can often be a challenge for fleet operators unless they have incorporated it into their maintenance plans. Both ECUA and the City of Pensacola have in-house technicians certified to perform tank and fuel system inspections.

It can be difficult to budget for the electricity expenses associated with CNG refueling infrastructure. Before the stations were constructed – and as part of our due diligence – it was suggested that we budget approximately $0.18/DGE. The Pine Forest Station, with two compressors and dispensing an average of 36,000 DGE monthly, has a $0.104/DGE electricity cost, while the Palafox Station, with one compressor and dispensing an average 3,000 DGE monthly, has a $0.19/DGE electric cost.

Gas consumption at the Palafox site has always been consistent, so there was never an expectation that the cost per gallon would decrease with time and usage. The Pine Forest station presents a different situation, with DGE usage trending higher since it went into service, and with electricity costs trending slightly lower. In November 2012, we dispensed 26,480 DGE with an electric cost of $0.1322/DGE, and in June 2013, we dispensed 42,675 DGE with an electricity cost of $0.09332/DGE.Â

Larry Hunter is the business development manager for Pensacola Energy. He can be reached at lhunter@cityofpensacola.com.