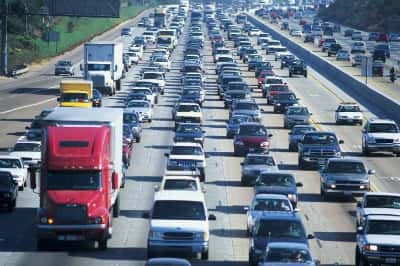 U.S. natural gas vehicle (NGV) production and sales totaled just over 18,000 vehicles in 2014, a slight decrease of 1,250 vehicles – or 6.5% – compared to 2013, according to a new report from NGVAmerica. However, the report says the number of total sales is surprisingly healthy given the dramatic drop in crude oil and related gasoline and diesel prices, which began in late June 2014. In fact, the report says the medium- and heavy-duty NGV segments both saw strong upticks.

The 2014 NGV Production/Sales Report is the result of NGVAmerica's annual survey of OEMs and approved aftermarket suppliers.

According to NGVAmerica, analysis of the survey data reveals that the light-duty market bore the brunt of the decline last year, dropping 34% – or nearly 3,500 units – compared to 2013. Meanwhile, the report says the medium-duty market, consisting of Class 3-6 vehicles, increased about 24% over 2013, although total production in this sector is still relatively small. Lastly, the heavy-duty market grew approximately 30%, a jump of approximately 2,000 units over 2013.

Light-Duty Vehicles
The report says the decline in light-duty NGV sales was due to a number of factors. The natural gas and oil exploration and production (E&P) sector had been a primary buying force in the light-duty segment in 2012 and 2013. These sales were further supplemented by fairly strong orders in the utility sector, moderate orders in the municipal sector, and by several strong commercial market leaders such as AT&T.Â

However, the report says the second half of 2014 saw the E&P sector hard hit by the drop in oil prices. Rig counts went down, there were significant layoffs, and new vehicle orders of all fuel types plummeted. While 2014 saw some utility orders, many utilities had “loaded up” on NGV orders in 2012 and 2013, and thus the orders from this segment were down compared to the previous two years, the report adds.

The municipal segment did not decline as much as other segments, though. The report says this is likely due to municipalities' committing to purchases based on sustainability goals rather than pure economics. While AT&T and several other large commercial accounts took delivery of NGVs in 2014, they achieved their target deployment goals earlier in the year. The report says miscellaneous small orders from small commercial accounts were not finalized as gasoline prices fell, further contributing to the decline in commercial segment orders.Â

Medium-Duty Vehicles
The medium-duty market increase was due to a mix of shuttles, utility cab-chassis orders, and several good-size commercial box truck cab-over-engine (COE) orders. The report says that while fuel use in many of these city-based delivery and passenger transport applications is less than over-the-road applications, medium-duty vehicles enjoy a lower up-fit cost and longer service life, which provides for significant lifecycle savings. This market is poised for continued growth as more platforms become available and as incremental price premiums drop, strengthening the overall economic value proposition, the report adds.Â

Heavy-Duty Vehicles
According to the report, the heavy-duty segment benefited from market drivers in three distinct areas: continued growth in refuse truck sales and strong transit bus orders, the first full-year availability of a new engine platform, and continued growth in dual-fuel systems.

The report says refuse truck sales continued to capture more than 50% of the market as the industry's large fleets – including Waste Management, Republic Services, and Progressive Waste Solutions – continued to transition to natural gas. Many medium-size companies also began to transition to natural gas as a way of staying competitive with their larger competitors. Natural gas transit bus orders were especially strong in 2014, as many existing agencies began replacing original natural gas units purchased in the late 1990s and early 2000s. Several new agencies also began transitioning to natural gas.

Furthermore, the report says the availability of the Cummins Westport ISX-12G 11.9L engine led to significant sales in a variety of platforms from most of the major truck OEMs. Unit sales showed a healthy increase over 2013, but the report says some analysts had assumed huge early growth that was not attainable.

The report says a very strong freight market led many fleets to focus on deploying trucks as quickly as possible to maximize revenue. Combined with longer delivery times and higher incremental costs for natural gas trucks, the pent-up demand in trucking resulted in many fleets deferring their first orders for natural gas units. The report says low oil prices possibly created further purchase-decision delays, but expectations are that as oil rebounds, orders will be placed. However, many fleets that began their transition to natural gas prior to June continued to place orders through 2014 and have indicated their plans to “stay the course” in 2015.

Sales of dual-fuel systems for inside useful life (IUL) and outside useful life (OUL) engines for legacy trucks and new gliders also saw significant growth, but the report says total sales of these units still represent a small portion of total heavy-duty truck sales. The steep and sustained decline in diesel prices also impacted the dual-fuel market, the report adds.

The report says that with the expected slow-but-steady increase in crude oil prices in 2015, the economic value proposition for NGVs across all sectors is expected to improve and once again drive greater NGV sales. The report cites the U.S. Information Agency's (EIA) most recent Short Term Energy Outlook (STEO), which projects that crude will hit the mid-$60 per barrel range by the end of this year for a 2015 “yearly average” of approximately $55 per barrel.

However, the report notes the certainty of this forecast is dependent on many complex factors, and oil markets will remain volatile. Supply curtailments of any kind, whether deliberate or unplanned, could dramatically raise the price of oil on short notice.

Solid growth in the heavy-duty sector is expected to continue in 2015 with similar sales gains in the Cummins Westport ISL-G 8.9L engine in refuse and transit applications, and a more robust sales performance of the ISX-12G engine in trucking and other heavy-duty applications. The report says the medium-duty sector is also expected to continue to make similar sales gains in 2015, due to the availability of several platforms for relatively low incremental costs and to significant lifecycle savings for most applications. However, the report adds, sales growth in both the heavy- and medium-duty sectors will continue to be tempered by and dependent upon the price of oil and the demand for diesel fuel.

The report says the light-duty sector is likely to continue to see slower growth in 2015 because of the relatively low price of oil, resulting in high storage supplies and low gasoline prices, and the high fuel economy and relatively low fuel use in most light-duty applications.

Despite the challenges low oil prices have brought, the report says the NGV industry still enjoys a number of benefits compared to petroleum-based fuels. Such benefits include abundant long-term supply leading to stable, predictable pricing; a 3:1 price advantage as compared to oil on an energy-equivalency basis, delivering significant savings to fleets; and greenhouse-gas emission benefits and other environmental advantages.

This article is adapted from NGVAmerica's 2014 NGV Production/Sales Report. The full report is available here.