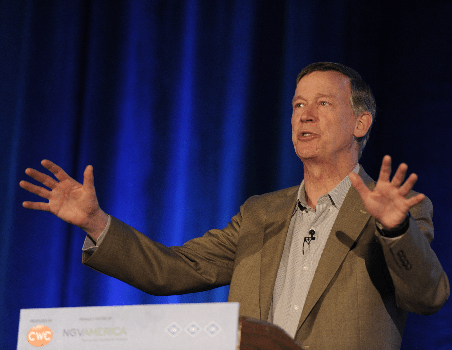 What were the biggest obstacles Colorado Gov. John Hickenlooper faced when his administration was in the throes of enacting new policies to bolster adoption of natural gas vehicles a few years ago?

Aside from a lengthy debate over exactly what tax incentives should be in place, and all the tweaking that went along with that, the other major obstacle, he said, was the ‘considerable pushback’ from the state police and leaders in other state departments and agencies, who at first were not sold on the idea of using natural gas vehicles for their fleets.

“Individuals across the various state agencies all pushed back, in various ways,” Hickenlooper said in response to a question from an audience member on Tuesday afternoon at NGV America's 2015 North American NGV Conference & Expo. “I was very surprised that there wasn't more buy-in, initially, from the various department leaders.”

The state police apparently expressed concern regarding the limitations of NGVs in terms of power and acceleration and the ability of police officers to pursue other vehicles. After an audience member gave an example of a local police department that has been successfully using NGVs for about a year, Hickenlooper indicated that his administration continues to work with the state police in Colorado to see if adoption can still happen.

“The police say their main concern is pursuit – but, knowing the dangers of high-speed chases, we're trying not to use pursuit anyway,” he pointed out.

Hickenlooper and Oklahoma Gov. Mary Fallin are considered leaders in encouraging other states to adopt alt-fuel programs, including the purchase of NGVs for their fleets. In 2011, he and Fallin signed an MOU with the intent of attracting manufacturers to build more functional and practical NGVs. Sixteen states signed on initially, and seven more later joined the fray.

The goal of the program, he said, is to build energy independence, which, in turn, is expected to lower energy costs and save money for taxpayers.

“Certainly, in terms of natural gas and its use in vehicles, pretty much all the facts demonstrate that over the long term, that it is the best idea,” Hickenlooper said. “When we talk about the environmental benefits, we recognize that CNG vehicles reduce emissions by 60 percent to 90 percent.

“When you compare natural gas to other fuels, it's certainly more affordable than gasoline, more stable – and here I'm really talking about the long term,” the governor noted. He acknowledged, however, that industry growth currently faces major headwinds due to low petroleum prices.

He went on to say that a lot of the turmoil and instability that the energy markets are seeing currently is “manufactured,’ and he expressed confidence that natural gas will always be affordable.

“Looking at it in the long term, CNG is always going to be cheap,” he remarked.

Currently, Colorado's alt-fuel grant program is offering up to $6,000 in tax rebates for light-duty vehicles and up to $20,000 for heavy-duty trucks as an incentive for individuals or businesses that wish to convert their vehicles to natural gas or wish to purchase all-new NGVs. The program reportedly provided incentives for more than 200 alt-fuel vehicles in its first year.

In addition, the state is planning the construction of 30 more CNG stations, 14 of which have already been funded, Hickenlooper told the crowd.