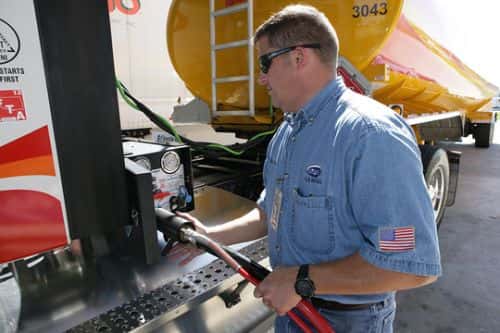 Love's Travel Stops, one of the largest travel-center networks in the U.S., says it will be adding compressed natural gas (CNG) refueling infrastructure at its location in Amarillo, Texas, representing the 11th new CNG site that the company will open in the first half of 2014.

The CNG refueling lanes in Amarillo, which will be built at the Love's travel stop at exit 74 on Interstate 40, are 100% accessible for over-the-road tractors and other heavy-duty natural gas vehicles. The lanes will also offer diesel exhaust fluid and Love's RFID fuel-management system, mirroring the traditional diesel-refueling capabilities found at the vast majority of its truck stops.

The two outside truck-fueling lanes in Amarillo will feature fast-fill CNG capacity via both NGV 1 and NGV 2 type nozzles. The CNG dispensers will yield at least 10 GGE of CNG per minute, and Love's is aiming to dial-in the refueling rate to up to 15 GGE/minute, Crites says.

Fleets such as Dillon Transport, which will be operating 10 new Class 8 NGVs in the area, will refuel at Love's Amarillo station. Love's itself, through its Gemini Motor Transport unit, is also using CNG-powered Class 8 fuel haulers – 55 of them in total, and five in Amarillo.

The CNG infrastructure on site in Amarillo will include compression equipment from Ariel, natural gas drying technology from Xebec and balance-of-system CNG components from ANGI Energy Systems.

In fact, this complement of equipment will be found at the other 10 CNG refueling sites that Love's will open in H1 2014, Crites says. Eight of these new locations are in Texas (Ft. Worth, Dallas, San Antonio, Houston, Rockwall, Willis, Katy and Seguin), and two are in Oklahoma City.

Love's already offers CNG refueling at other locations in Oklahoma, with retail prices as low as $1.699/GGE.

Photo: A driver fills up with CNG at a Love's station. Courtesy of Love's