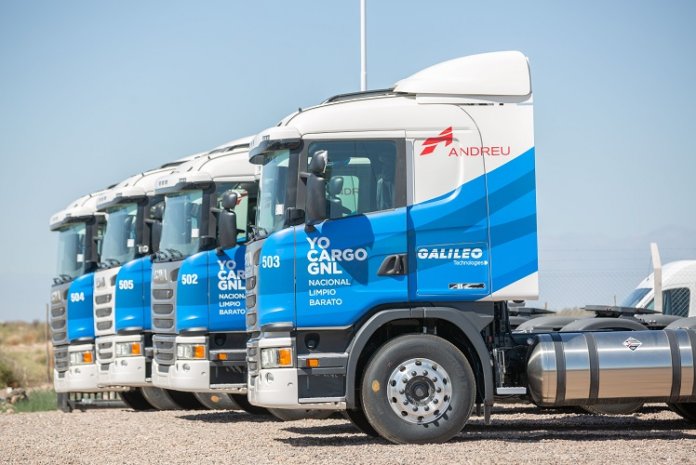 Galileo Technologies has begun to distribute liquefied natural gas (LNG) as fuel for trucks in Argentina.

A groundbreaking event – which took place at the Anchoris Thermoelectric Power Plant, located in the Mendoza province – included the fueling of six Scania G340 trucks, specially equipped to run on LNG.

“When this truck fleet working for Galileo starts riding the Argentine roads, we will show that LNG is the most adequate fuel for cargo transportation because it is national, clean and inexpensive,” comments Osvaldo del Campo, president and CEO of Galileo Technologies.

Fitted with two cryogenic fuel tanks that can load up to 265 kilograms of LNG, the trucks boast 1,100 kilometers of fuel range. During their trips, which will include driving on mountainous and gravel roads, the new trucks will tow trailers that Galileo uses to carry LNG from wells located around Mendoza and Neuquén to the recently opened Anchoris Thermoelectric Power Station, which runs on LNG.

Galileo plans to add a “Corredor Azul” (Blue Corridor) of LNG filling stations on Argentine roads, including LNG dispensers for logistical centers. These dispensers will work without being connected to the natural gas network and will be supplied by the virtual pipeline, remotely monitored by a SCADA system.

“In 1984, we successfully launched compressed natural gas. Now, with our own technology, we extend the use of LNG as a professional and high-power fuel in order to expand the productive boundaries of the country,” adds del Campo.