Home Up Front Go Ahead: Shoot at the New Chevy Impala CNG 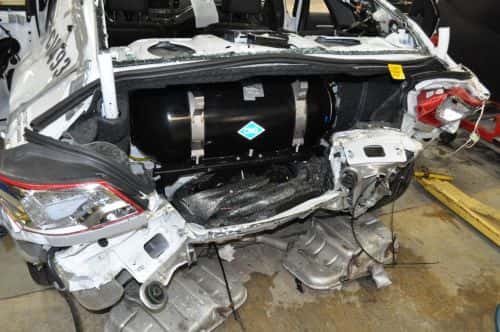 Not that you'd want to… but you could.

Take, for instance, the penetration test. Here, professionals filled the Impala's 7.8 GGE CNG tank to its service pressure and then shot at it with a 7.62 mm armor-piercing bullet. This is the same caliber you'd find on the AK-47 assault rifle.

If the bullet goes through one side of the tank without exiting the other side, the tank passes the test – which it did.

‘The goal is to have the tank maintain the bullet hole only as the weak structural point, without rupturing,’ according to GM.

The Impala CNG was also subjected to the industry-standard ‘bonfire test,’ which proved that the cylinder's pressure relief valves work properly, reducing pressure when extreme heat is sensed.

‘In addition to placing the tank about four inches above a steady 800-degree Fahrenheit fire, General Motors' engineers added trunk, back seat and underbody fires to test the pressure relief valves' ability to sense heat on all sides of the tank. And the tests were done at two different fuel levels,’ the company explains.

Additionally, the vehicle went through rear-impact, side-impact and front-barrier crash tests to see how the bi-fuel Impala would fare in real-world collisions, and the CNG tank itself was subjected to ‘long-term structural integrity tests equivalent to 15,000 pressure cycles and hydrostatic bursting tests of up to 8,100 PSI.’

GM notes that many of the tests it conducted exceeded federal requirements, as well as the guidelines put forth by the CNG/NGV industry.