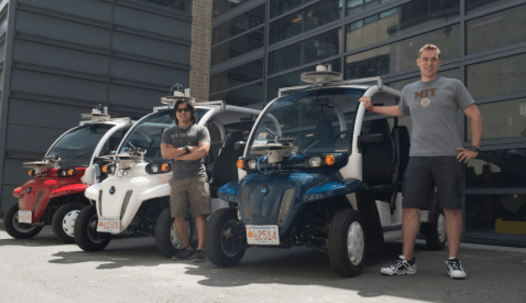 Ford Motor Co. and the Massachusetts Institute of Technology (MIT) are introducing a fleet of on-demand electric vehicle (EV) shuttles that operate on both city roads and MIT Cambridge campus walkways as part of a new mobility research project.

According to Ford, the two companies are collaborating to measure how pedestrians move in urban areas to improve certain public transportation services, such as ride-hailing and point-to-point shuttles services, as well as to predict the demand for these shuttles.

The automaker says that the new EVs use LiDAR sensors and cameras to measure pedestrian flow, which ultimately helps predict demand for the shuttles. This, in turn, helps researchers and drivers route shuttles toward areas with the highest demand to better accommodate riders.

“The onboard sensors and cameras gather pedestrian data to estimate the flow of foot traffic,” says Ken Washington, vice president of research and advanced engineering at Ford. “This helps us develop efficient algorithms that bring together relevant data. It improves mobility-on-demand services and aids ongoing pedestrian detection and mapping efforts for autonomous vehicle research.”

As reported, the MIT research is being conducted by the Aeronautics and Astronautics Department’s Aerospace Controls Lab (ACL). The ACL researches topics related to autonomous systems and control design for aircraft; spacecraft; and ground vehicles, including EVs. Theoretical and experimental research is pursued in such areas as estimation and navigation, planning and learning under uncertainty, and vehicle autonomy.

“Through the mobility-on-demand system being developed for MIT’s campus, ACL can investigate new planning and prediction algorithms in a complex, but controlled, environment while simultaneously providing a testbed framework for researchers and a service to the MIT community,” says Jonathan How, ACL director.

Ford and MIT researchers plan to introduce the EV service to a group of students and faculty beginning in September. This group will use a mobile application to hail one of three electric urban vehicles to their location and request to be dropped off at another destination on campus.

According to Ford, the EVs are small enough to be able to navigate the campus’ sidewalks while still leaving plenty of room for traditional pedestrian traffic. Each is outfitted with weatherproof enclosures that shield out inclement weather – a feature particularly useful for New England winters.

After requesting the shuttles via a smartphone app, MIT students and faculty won’t be waiting long for their rides to arrive.

During the past five months, Ford and MIT have used LiDAR sensors and cameras mounted to the EVs to document pedestrian flow between different points on campus. LiDAR is the most efficient way to detect and localize objects from the environment surrounding the shuttles. The technology is much more accurate than GPS, emitting short pulses of laser light to precisely pinpoint the vehicles’ locations on a map and detect the movement of nearby pedestrians and objects.

This collaboration further enhances Ford’s Dynamic Shuttle project and is one of more than 30 mobility solutions research projects between Ford and universities in the U.S., Germany and China aimed at helping the company and the academic world improve mobility for millions of people around the world.