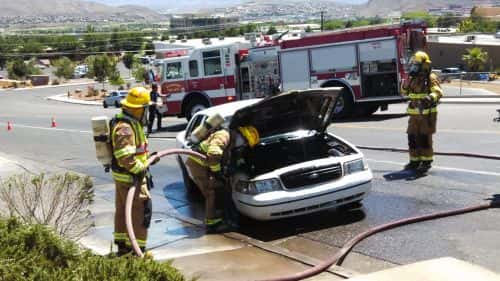 That's the bad news: that the word ‘fire’ is connected to ‘natural gas vehicle’ in any context, from any media source.

The good news is twofold: First, no one was hurt. Second, it seems likely that neither the natural gas fuel system itself or the vehicle conversion is to blame for the incident.

According to the article, the driver of the vehicle ‘turned on the air conditioning and heard a 'pop' sound,’ at which point ‘he began to smell propane.’

NGT News talked to Ken Guard, battalion chief of the St. George Fire Department, who confirmed that the vehicle was a 2000 Ford Crown Victoria NGV – not a propane vehicle. So although the driver said he smelled propane – and Guard confirmed the driver's remarks – the odor could not have been propane.

The vehicle was equipped to run on compressed natural gas, but observations made at the scene suggest that the driver likely did not smell CNG, either. Guard says there was significant fire damage at the right-front corner of the vehicle, where the battery is located and across from where the air-conditioning condenser and blower motor are mounted.

He says that when he observed the engine compartment, the blower was laying between the wheel well and the firewall. The piece of equipment was mostly intact and not burned, nor was the plastic cover of the wheel well.

There was only minor fire damage near the vehicle's intake manifold, fuel injectors and fuel rails. No part of the fuel system showed signs of an explosion or other catastrophic failure, Guard says.

‘I'm not convinced that it was a fuel fire,’ he says. ‘Everything I saw led me to believe it was not the fuel system.’

But Guard acknowledges that because this was a relatively minor incident in which no one was injured, a definite cause will probably never be known. Neither the fire department nor the fire marshal in St. George will be investigating the matter, and the insurance companies will likely write off the loss without much follow-up.

Guard did say that in the 10 or so years that NGVs have been common in Utah, he has not encountered a single emergency attributable to a natural gas vehicle's fuel system.

Photo by Mori Kessler of the St. George News