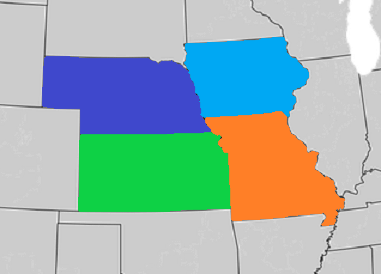 The MEC project will also replace seven tractors with liquefied natural gas (LNG)-powered tractors and 12 tractor engines with 2019 EPA-certified diesel engines. In addition, the project also replaces a municipal diesel trash hauler with a CNG-powered one, as well as funds 128 electric vehicle parking spaces that will be installed at a private truck/fleet terminal.

According to the EPA, the MEC’s funding is designed to reduce diesel emissions and exposure in multiple metro areas in Missouri, Kansas, Iowa and Nebraska.

Next, the EPA awarded a $943,725 grant to the Owner, Operator and Independent Driver’s Association (OOIDA) of Grain Valley, Mo., to reduce diesel emissions from trucks in Missouri, Kansas, Iowa and Nebraska. The DERA project will aid OOIDA in its efforts to reduce diesel emissions and exposure in the four-state region by installing 420 auxiliary power units in the association members’ trucks.

The commission was awarded a $365,545 grant to replace four older diesel engines in two Mississippi River workboats to reduce emissions and exposure in St. Louis and Cape Girardeau.

In addition, a $195,963 DERA grant was awarded to replace two, old non-highway front loaders in the Mississippi Lime Project. Replacing the front loaders will aid SEMORPC in its efforts to reduce diesel emissions and exposure in St. Genevieve County, says the EPA.