The DOE release states that in model year 2011, there were just three different AEV models available. According to the U.S. Environmental Protection Agency, when these models were fully charged, their ranges spanned from 63 miles to 94 miles.

By model year 2016, the number of AEV models jumped to 12, and the available ranges widened – from a minimum of 62 miles for the Mitsubishi I-MiEV to a maximum of 294 miles for the Tesla Model S 90D.

These ranges are displayed in the below chart, provided by the DOE. 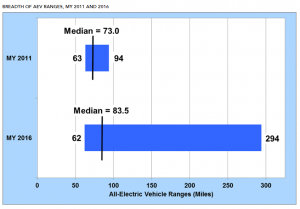 The release also catalogs other models and their mile ranges, including the following: