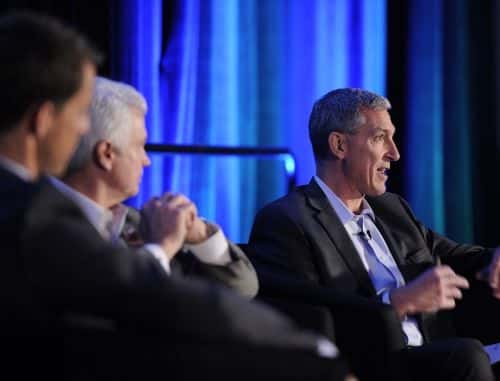 Yes, oil prices are low, U.S. federal regulations and environmentalists are cracking down on fossil fuels, and Congress is almost permanently in gridlock, but the domestic natural gas industry – and, thus, the natural gas vehicle (NGV) sector – is pushing forward and remaining strong nonetheless.

At least that was one of the main takeaways from the North American Natural Gas Vehicle Conference and Expo's first opening plenary session, which included a broad discussion about the natural gas supply chain, future outlooks for the nat-gas market, and policy opportunities and hurdles. Matthew Godlewski, president of NGVAmerica, sat with Dave McCurdy, president and CEO of American Gas Association (AGA), and Marty Durbin, president and CEO of American Natural Gas Alliance, during the session Tuesday afternoon.

Initially, McCurdy and Durbin each gave a short presentation from the standpoints of natural gas distributors and producers, respectively.

“We are in a really great spot,” said McCurdy. “Despite the dismal talk about oil prices, you have to look at the progress. The data speaks for itself. We've not only increased the number of homes getting natural gas, but the efficiency of the process is truly what's remarkable today.”

To put the U.S.' natural gas infrastructure network in perspective, McCurdy said there are nearly the same number of miles of natural gas pipelines in the country as there are of paved roads around the nation.

“Natural gas utilities deliver to more than 177 million Americans, and consumers are benefiting,” he commented, later adding that AGA and its members work with state legislators, regulators and other key stakeholders to enhance system integrity.

“The infrastructure will continue to expand,” McCurdy said. “I think that's a good story to tell.” 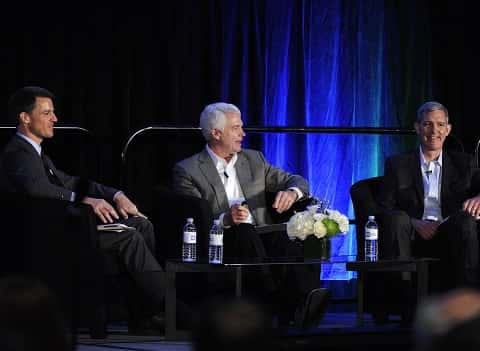 Durbin then gave a producer's standpoint and referenced the low oil prices, as well. “The natural gas industry has been through this before, but we can offer price stability.” He also cited a wide range of supply projections. “The punchline is we got a heck of a lot of natural gas in America.”

Furthermore, Durbin suggested production is slated to increase each year and become even more efficient and environmentally safer, thanks to technological advancements.

Godlewski then asked the speakers to talk politics, and both McCurdy and Durbin pointed to the Obama administration's big focus on climate change.

“I frequently get questions from reporters about whether the White House is on our side or has turned a corner,” Durbin. “I do think that most of the administration has put up roadblocks.”

He said that when President Barack Obama first entered office, oil and natural gas “were considered a big problem,” but the president's State of the Union speeches “kept sounding better” for gas. Now, however, Durbin believes the administration is “seeking a legacy” with a larger focus on renewable energy over fossil fuels. For example, the U.S. Environmental Protection Agency's Clean Power Plan, which will mandate stricter emissions cuts for existing power plants, is expected to help boost the wind and solar power sectors.

“Politics is winning over policy,” he said. “It's not as if you could only help renewables by putting a boot on the throat of natural gas.”

“First of all, don't react to every headline,” emphasized McCurdy. “It'll drive you crazy. Every day, there's a new study, and I spend a lot of my time saying, “Relax, let's look at the big picture.'”

“Take and convert your heavy-duty rigs,” he later said. “It'd affordable. Most importantly, it's clean. Yes, it's a fossil fuel, but there are so many technologies we could work to make it even cleaner. Let's not moonshoot for perfect. Add up all the benefits.”

Although the presidential election isn't until November 2016, Godlewski noted that the primaries are already heating up, and he asked for thoughts on what effect a new president might have on the natural gas industry.

In fact, he and McCurdy suggested the industry is more likely to see progress by working on the state level, rather than on the federal level.

McCurdy said there is an “ideological gridlock in Congress,” and Durbin noted, “If you're not looking at the states, you're missing a big part of what's going on.”

Regardless, all three men on the stage said the natural gas industry needs to keep reaching out to and working with all lawmakers. The work doesn't stop there, though; the message must also be presented to consumers and companies. As McCurdy said, “the American public needs to say we need to fix and address” the political landscape.