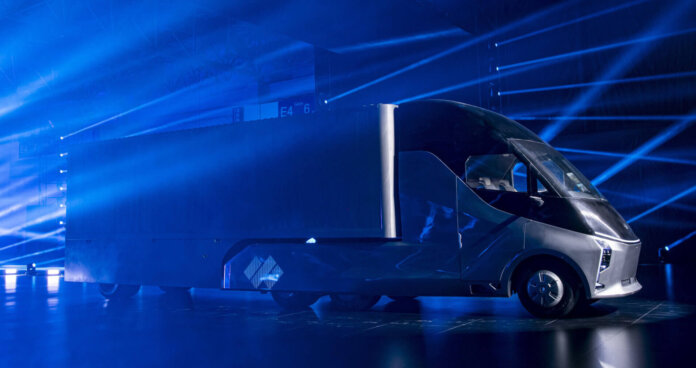 DeepWay, a Baidu-backed company, has unveiled Xingtu, a smart heavy-duty truck with a computing power of more than 500 TOPS and ultra-long-distance sensing capabilities of more than 1 km. This announcement marks Baidu’s entry into the global freight market.

The truck is powered by Baidu’s AI technology stack and the Baidu Apollo autonomous driving platform. The first generation of Xingtu is designed to enable L3 self-driving on high-speed freight routes and achieve L4 capabilities on these same routes between 2024 and 2026.

“Autonomous driving must use advanced driverless technology to create new products that offer the ultimate experience in order to achieve commercial success,” says Yunpeng Wang, vice president and general manager of autonomous driving technology at Baidu. “We aim to create value in real-life scenarios such as transporting people, delivery and life services. This new generation of vehicle is by no means just a modified truck – it’s a robot truck.”

Xingtu features DeepWay’s home-grown highway intelligence system (HIS) and a computing power of more than 500 TOPS. Equipped with 10 onboard cameras, 5 millimeter wave radars and 3 infrared detectors, along with advanced algorithms, Xingtu can achieve end-to-end autonomous driving – from perception to planning – within 100 ms, and ultra-long range detection of more than 1 kilometer.

The truck offers increased efficiency for freight drivers. Simulation tests with the China Automobile Research Institute showed a wind resistance coefficient as low at 0.35. At a full load of 49 tons, Xingtu’s 450 kWh battery pack can travel up to 300 kilometers on a single charge, and charges in just one hour at a 1C current. In addition, DeepWay has also developed a quick-swap solution for the battery, which enables freight drivers to swap out their battery in 6 minutes.

Xingtu adopts a lightweight integrated battery and chassis design, which greatly reduces wind resistance. Coupled with E/E architecture that integrates across multiple domains, the vehicle is much easier to control, making it more stable and safer to operate.

The new generation of smart cabin adopts the concept of separate driving, working and living spaces, giving more room to the drivers. It is equipped with an intelligent voice assistant, a large touch screen infotainment system, and ultra-comfortable seats and beds for freight drivers. The Apollo technology underlying DeepWay’s Xingtu has been developed by Baidu since 2013 and has nearly 8.7 million test miles.