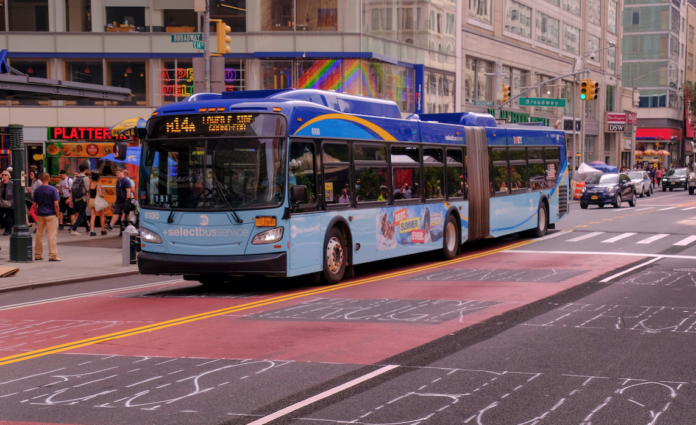 Gov. Andrew M. Cuomo has unveiled a series of initiatives to increase the number of electric buses in New York as part of the state’s efforts to mitigate climate change, create healthier communities, improve air quality and boost access to clean transportation in underserved communities.

Specifically, this effort includes $16.4 million in incentives for the expansion of electric bus usage among public transportation authorities, as well as $2.5 million for school bus operators to acquire cleaner forms of transportation with lower emissions. These measures will help take polluting vehicles out of service across the state to reduce greenhouse gas emissions and improve air quality in support of Cuomo’s clean energy and climate goals in the Climate Leadership and Community Protection Act.

“Electrifying transit and school buses at scale is an important step in our fight against climate change and is essential in helping us reach our ambitious goals to create a greener New York,” says Cuomo. “Through these initiatives, bus operators will now have the support and resources they need to modernize their fleets, reduce emissions and ensure underserved communities have cleaner public transit options as we work to further reduce our carbon footprint.”

Under the New York Truck Voucher Incentive Program (NYTVIP), $16.4 million Volkswagen settlement funding is being made available to five of the largest public transit operators in the state – the Capital District Transportation Authority, Niagara Frontier Transportation Authority, Rochester-Genesee Regional Transit Authority, Suffolk County Transportation and Westchester County Bee-Line Bus System – to facilitate their fleets’ transition towards 100% zero-emissions fleets by 2035, a goal Cuomo announced in his 2020 State of the State Address.

Under this program, purchasers of new, zero-emissions all-electric transit buses are eligible to have 100% of the incremental vehicle cost covered on the condition that these buses are housed at bus depots or operate on routes located within a half-mile of a disadvantaged community. This funding builds on the NYTVIP program expansion announced earlier this year. Combined, these transit operators currently run more than 1,300 transit buses.

To provide further support, New York State Energy Research and Development Authority (NYSERDA) and the New York Power Authority (NYPA) have reached an agreement which includes more than $1 million in funding for a new program to help the five large upstate and suburban transit operators develop plans to convert to all-electric transit buses. Through this program, NYSERDA and NYPA will work with a competitively selected, pre-qualified contractor to study how to transition to electric bus fleets and install the needed charging stations in a cost-effective way. Areas of study include transit operated facilities and parking lots that could become large scale charging hubs, utility upgrades, route-based charging, the need for high-speed charging to extend bus range, resiliency planning and the need for backup power solutions.

Additionally, another $2.5 million is also now available through the NYTVIP to school bus operators statewide to support the purchase of cleaner, less polluting buses. Funding will help cover up to 100% of incremental costs for all-electric school buses operating near disadvantaged communities. The program reduces the cost to purchase new, clean electric or alternative-fueled buses through point of sale rebates offered through a qualified vendor.

The New York State Office of General Services (OGS) also issued a request for information (RFI) on Dec. 23, seeking details from manufacturers and dealers about electric and hybrid transit buses currently available in the marketplace. Responses to the RFI, which are due by Jan. 21, will be used to develop a solicitation for electric and hybrid buses with the goal of providing transit authorities with options for purchasing green vehicles for their fleets. Transit authorities from across the state helped OGS finalize the RFI before it was issued, and they will also be involved in the evaluation of responses received to ensure the resulting procurement for clean transit bus purchases meets their needs.

NYTVIP also offers funding for businesses and municipalities that want to purchase new, clean electric vehicles or repower commercial trucks. NYTVIP is administered by NYSERDA in partnership with the New York State Department of Transportation and the New York State Department of Environmental Conservation. The $63.4 million for the program consists of $53.4 million from the state’s $127.7 million federal allocation from the Volkswagen settlement, which is directed by the multi-agency Clean Transportation NY plan and approximately $10 million in federal air quality improvement funds allocated to the New York State Department of Transportation. In addition to supporting the NYTVIP program, NYSDOT has provided an additional $7 million in direct assistance to facilitate the electrification of upstate transit fleets.