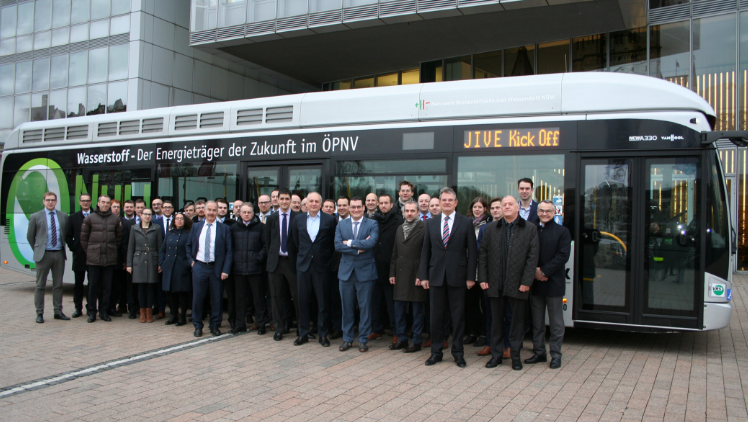 A new collaborative initiative is ready to deploy 144 hydrogen fuel cell buses, as part of the JIVE project, and seven large hydrogen refueling stations, per the MEHRLIN project, across Europe.

Worth approximately EUR 125 million, these projects represent “a step change for the hydrogen bus sector,” moving from a technology demonstration stage to a day-to-day offering for zero-emission public transport.

According to the Fuel Cells and Hydrogen Joint Undertaking (FCH JU), these hydrogen fuel cell buses will offer the same operational flexibility compared with the incumbent diesel buses, without any harmful exhaust fumes. As such, they represent a solution to the twin problems of air pollution and greenhouse-gas emissions from public transport in major cities.

The scale of deployment envisaged will allow European bus manufacturers to develop their production capabilities and achieve the economies of scale that are needed to allow fuel cell buses to compete with other zero-emission modes of public transport. Likewise, the project will show how hydrogen refueling stations with large daily demands can be commercially viable, providing valuable operational feedback to station operators and equipment manufacturers, while also demonstrating the reliability and availability required for public transport operations.

The JIVE project, supported by a EUR 32 million grant from the FCH JU, a public-private partnership aimed at accelerating commercialization of fuel cells and hydrogen technologies, has been developed and will be coordinated by Element Energy and is based on a partnership of public transport providers who will work together to procure the buses and refueling stations from European suppliers.

Per the plan, fuel cell buses will be deployed in five European countries in the following cities and regions: Region Köln, Wuppertal and Rhein-Main in Germany; London, Birmingham, Dundee and Aberdeen in the U.K.; South Tyrol in Italy; Riga in Latvia; and Slagelse in Denmark.

The JIVE deployment partners will be supported by data analysis and consulting organizations (led by Thinkstep and PLANET) to ensure that the performance of the buses is monitored and can be rigorously compared against the incumbent diesel buses and other zero-emission alternatives. Communication will be led by Hydrogen Europe, working with UITP (International Association of Public Transport), to ensure that these lessons are spread across Europe’s bus operator community.

The MEHRLIN project, supported by a EUR 5.5 million grant from the European Commission’s Connecting Europe Facility (Transport) program managed by the Innovation and Networks Executive Agency, aims to demonstrate a new demand-led commercial model for the deployment of hydrogen refueling stations. The project, coordinated by Element Energy, involves a study of the real-life operation of large-scale hydrogen stations in seven different locations, with stations in Germany, Italy, the Netherlands and the U.K.

According to the FCH JU, all of the stations are situated on Europe’s TEN-T core network corridors. The studies will be focusing on the financing of stations and on technical, environmental, economic and regulatory performances of hydrogen refueling stations. The FCH JU says that dissemination events will be organized in the countries where stations are located.

Ben Madden, director of Element Energy, says, “We are delighted to have helped start this project, which has the potential to transform the hydrogen fuel cell bus sector. Previous projects have proved that hydrogen fuel cell bus technology is technically ready and able to meet the needs of public transport operators on all routes. This project delivers a step-change in scale, which allows manufacturers to start to deliver vehicles at a commercially plausible price. Its success will kick-start the commercial rollout of hydrogen fuel cell buses to assist in improving air quality and reducing greenhouse gases from our public transport systems.”

Bart Biebuyck, the FCH JU’s executive director, says, “Project JIVE is now the fifth project related to deployment of fuel cells buses supported by the FCH JU, and its launch marks a significant turning point in the decarbonization of public transport. The FCH JU is proud of such a far-reaching project seeing the daylight, which aims at unlocking the economies of scale required for commercialization.”