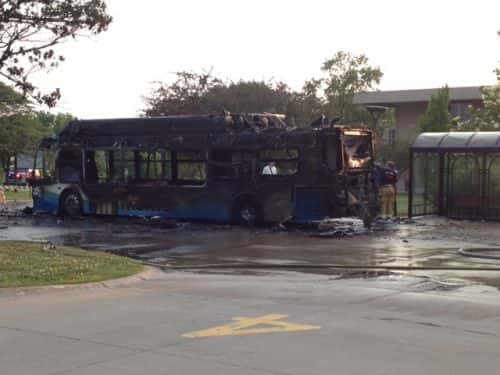 On Monday afternoon, a compressed natural gas (CNG)-powered bus caught fire in Moline, Ill., but officials from the local fire department and the bus operating company say there is no initial indication that CNG is to blame for the incident. No one was injured.

Jennifer Garrity, spokesperson for the Rock Island County Metropolitan Mass Transit District (MetroLINK), says the bus driver had left the unoccupied vehicle parked but still running at Black Hawk College in order to take a short break. When the driver came back, she saw smoke rising from the engine compartment, discovered a fire under the hood, and attempted to extinguish it herself. The effort proved unsuccessful, so she called the fire department.

Jim Versluis, training officer at the Moline fire department, says that by the time firefighters arrived on scene, the blaze had spread and the whole bus was engulfed in flames.

Garrity and Versluis both say that shortly after the firefighters began their attack, the pressure-relief devices on the bus' rooftop CNG tanks properly triggered and started to vent the natural gas. Versluis, who was not on scene but reviewed the department report and spoke with firefighters who were there, says the fire ignited the CNG.

He says firefighters worked to control the bus' flames but purposely allowed the CNG coming from the tanks to continue burning and empty out.

“That is because as long as the natural gas is on fire, we know where it is,” Versluis explains. “If we put out the flames, then the gas escaping becomes invisible.”

“A typical firefighting tactic is to spray water on the top of the tank, or vapor space, and try to keep the tanks cool enough so they don't overpressurize while waiting for the gas to be fully released,” he continues.
Â
Versluis and Garrity emphasize this is an isolated incident. Nonetheless, because CNG vehicles account for about 80% of MetroLINK's bus fleet, Garrity says the operator trains the fire department on how to deal with any potential issues that might arise.

“I think that was pretty key in how they determined the best course of action,” says Garrity.

Although MetroLINK operates CNG buses from different manufacturers, including ElDorado National and New Flyer Industries, Garrity says the affected bus was a 40-foot New Flyer Xcelsior CNG model. At press time, she could not verify how many CNG tanks were on the bus.

When contacted for this story, a New Flyer spokesperson declined to comment.

Regardless, Versluis and Garrity say the main point is that the tanks' safety mechanisms did their job.

“If the pressure relief valves work and release the gas, we're not too worried about an explosion,” notes Versluis. “The bus did exactly what it was supposed to do.”

As for what caused the fire in the first place, he says, “There's no indication that it was the CNG itself. The fire just spread beyond the engine compartment.” He adds that no foul play is suspected.

Garrity says MetroLINK is looking into the incident.Â

“Preliminary investigation suggests it's electrical, not CNG related,” she states. “At this point, we are doing a thorough assessment with our own internal maintenance crew and looking to bring in a forensic expert who can provide additional support in helping us determine the cause of the fire.”