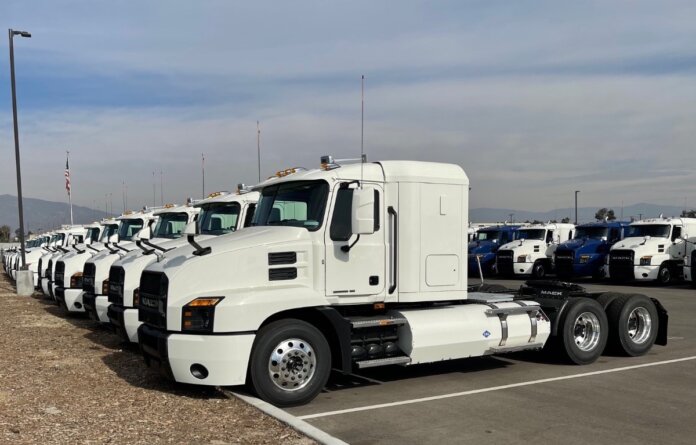 In the ports of Los Angeles and Long Beach in California, Clean Energy’s Adopt-a-Port program with Chevron continues to gain momentum, with more fleets switching to RNG. Chevron has committed to provide a total of $28 million of financing to trucking companies serving the ports region, as well as owner-operators, to purchase new RNG heavy-duty trucks. So far, over 200 heavy-duty trucks have been contracted through the program, and over 400 more are being processed.

Pacific Green Trucking continues to expand its clean fleet in the port region, signing a fueling agreement with Clean Energy for an estimated 1 million gallons of RNG to power 61 new natural gas trucks.

“Reducing our carbon emissions and improving air quality near the ports is a top priority for Pacific Green, and we’re doing it one truck at a time,” says Vicente Zarate, president of Pacific Green Trucking. “RNG is the most immediate and cost-efficient way to make the necessary environmental changes for the trucking industry.”

“Renewable natural gas creates a pathway for our customers to dramatically reduce their carbon emissions and turn their sustainability goals into reality,” comments Chad Lindholm, vice president of Clean Energy. “As the demand for RNG accelerates, more clean natural gas trucks are hitting the roads in the Port of Los Angeles and elsewhere, and we’ll be there to provide both the fuel and infrastructure to help fleets realize immediate and significant carbon reduction.”

Republic Services has signed an agreement with Clean Energy for an expansion project in Huntington Beach, Calif. The first phase includes expanding an existing RNG fueling station to accommodate more refuse vehicles, as well as adding new fast-fill capabilities for their growing private fleet and transfer truck operations. In the second phase of the expansion, Clean Energy will construct a new station at an adjacent address to fuel 30 additional RNG trucks.

In addition to these projects, Clean Energy has been contracted for a major expansion of the Republic Services RNG fueling facility in Anaheim, Calif., that will provide 52 additional fueling bays for refuse trucks.

Several other recent agreements are as follows:

-Harrison Industries in Ventura, Calif. has signed an agreement for a station upgrade and fueling contract for an anticipated 7 million gallons of RNG to fuel 80 natural gas solid waste trucks.

-Golden Empire Transit in Bakersfield, Calif., has signed a maintenance agreement with Clean Energy for its fueling station, which will provide an expected 2 million gallons of RNG during the term to power over 100 transit buses.

-Salem Area Mass Transit District in Oregon, which has operated natural gas buses for more than 20 years, has signed a $1.6 million contract with Clean Energy for a station upgrade to accommodate its 64 transit buses.

-Clean Energy has signed an agreement with MV Transit in Long Beach, Calif., for an anticipated 700,000 gallons of RNG to fuel municipal buses.

-The County of Sacramento has signed a maintenance contract for an expected 900,000 gallons of compressed natural gas (CNG) to fuel 50 refuse trucks.

-Blue Diamond Disposal, a refuse and recycling company located in Mount Arlington, N.J., has renewed a maintenance agreement with Clean Energy. The station will dispense an expected 2.5 million gallons of CNG during the term to fuel 50 refuse trucks.

-The Atlantic County Utilities Authority (ACUA) has signed a contract with Clean Energy to continue maintenance services for the Egg Harbor Township, N.J., refuse and recycling company. The station will provide an anticipated 1.6 million gallons of CNG to fuel 58 refuse trucks over the contract term.

-The City of Tacoma, Wash., has signed a maintenance agreement with Clean Energy for an estimated 700,000 gallons of CNG to fuel 50 waste trucks.

-The Portage Area Regional Transportation Authority (PARTA) in Ohio is continuing to add CNG vehicles to its fleet.

-Longtime Clean Energy customer Atlantic City Jitney Association, which operates shuttle buses out of Egg Harbor Township, N.J., has extended its contract for an estimated 900,000 gallons of CNG to power its fleet.

-Green Path Logistics, a large nationwide carrier in Dallas, has signed a fueling agreement with Clean Energy for 900,000 gallons of fuel for its fleet of 100 heavy-duty trucks.

-The City of Temple, Texas, has inked a maintenance contract with Clean Energy for its station, with an expected 576,000 gallons of fuel, over the term for 30 sanitation trucks.

-In Canada, the City of London, Ontario, has inked a fueling agreement with Clean Energy for an expected 476,000 gallons of fuel for 28 refuse trucks. The city has been operating six CNG-powered refuse trucks for more than a year at the London Flying J truck stop and has added the 28 new trucks to support the city’s new “Green Bin” program expansion.