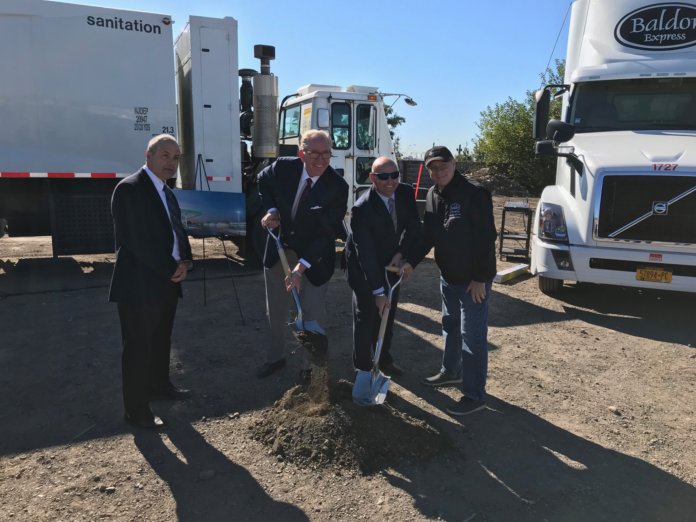 Clean Energy Fuels Corp., the City of New York, and community leaders have broken ground on a new compressed natural gas (CNG) refueling station in the Hunts Point section of the Bronx in New York City.

“There are currently thousands of vehicles from refuse trucks to shuttles to gourmet food delivery trucks that operate on natural gas, and the air over New York is cleaner because of it,” said Andrew J. Littlefair, president and CEO of Clean Energy. “This new station in the Bronx will allow more fleets, both public and private, to realize the economic and environmental benefits of fueling with natural gas.”

“DOT is proud to be part of this unique groundbreaking, which will benefit the Hunts Point community and all of New York City,” said Lopez. “From our Clean Trucks program, which reduces pollution, to energy-efficient goals laid out in our Strategic Plan, we look forward to participating in ways to make our city as green as possible.”

According to a Clean Energy press release, DSNY currently operates collection trucks and street sweepers with CNG and calculates its greenhouse-gas reductions at an estimated 450 metric tons. That’s similar to removing recycling 159 tons of landfill waste or planting 11,400 trees.

Also committing to take advantage of the new fueling station when it opens next year is Hunts Point staple Baldor Specialty Foods, whose company culture includes sustainable initiatives such as the use of alternative fuels to power its fleet.

“We have been committed to employing alternative fuels to both control costs and protect the environment,” said Steve Tufo, transportation manager at Baldor Specialty Foods. “Our headquarters are here in Hunt’s Point, our families live in Hunt’s Point, so we have a responsibility to keep our neighborhoods as clean as possible, and we do that with natural gas.”

“In a city the size of New York, we all must do our part to ensure we provide the services our residents’ need while doing so in a responsible manner, and that includes reducing emissions from vehicles,” said NYC Councilmember Rafael Salamanca Jr.

“We’re very pleased to have worked with the developers of Clean Energy Fuels on this project,” said Marc Huestis, senior vice president of gas operations for utility Con Edison. “Not only is natural gas better for the environment than diesel or gasoline, the other innovative clean technologies that will be incorporated into this facility will further improve the city’s air quality for all of our residents.”

According to the release, Clean Energy continues to promote the use of CNG across NYC, including the addition of the multi-fuel travel plaza at the John F. Kennedy International Airport.